Free to HolyJuan fans! The Power of Soup

Two years ago, I thought that I should write a children’s book, get published and make a shitload of money. So I got together with my illustrator friend Meshell and she showed me her portfolio for inspiration. In her large collection of drawings was an illustration that caught my eye. A woman with a large spoon tucked in her apron. She hugged a large bowl of soup with the words, “Get well soon” floating on the surface. 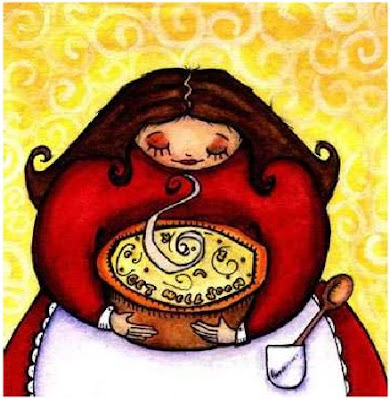 So I wrote a story based on that illustration called, “The Power of Soup.” My biggest critic, Miss Sally, liked it. I shared it with Meshell and she liked it and said that, if I asked her nicely, she would illustrate the rest of it. I said I would give her the first opportunity, once I secured a publisher.

Together, Meshell and I bought “How to Get Published” books and I sent my properly formatted copies of “The Power of Soup” out to several publishers. I even bought the website, www.thepowerofsoup.com, just to be sure.

Six rejection form letters later, I’m done with the half-dream. Instead, let me share it with you, the people who care for and love me.

So here, my friends, is my story, The Power of Soup. See if you tear up when you read it, like I did when I wrote it.

The Power of Soup

In a very small house with two very small windows, lived a woman. She lived alone, but she was never lonely.

People would come from the villages near and far to the woman’s house and bring whatever ingredients they had so that she could make her delicious soup for them.

Miss Dryer came to the woman’s door, “I have carrots.”

“Then we will make carrot soup.”

Mr. Hearty came to the door. “I have potatoes.”

“Then we will make potato soup.”

The Simon twins came to the door, “We have turnips and leeks.”

“Then we will make turnip and leek soup.”

Everyone loved the woman’s soup.

One day, a little dark haired girl with sad eyes came to the woman’s door. She wore handmade clothes that were more patches than cloth.

“Can you please make me some soup?”

“What have you brought with you to make the soup?” asked the woman, knowing the answer.

The woman said, “Come inside. I think you have something to add to the soup.”

The woman added water to the very large kettle. She lit the very big stove and began to stir.

The little girl stood on a little chair and was just able to look over the edge of the kettle.

She spoke in but a whisper, “I love you Mommy. Get well soon.”

And as she stirred and stirred the soup began to churn and bubble. Broth began to form and carrots and peas and beans and leeks and hundreds of herbs and vegetables and flavors mixed and melded in the pot. With a final stir, letters formed of pasta bubbled to the surface.

…and they sank. Then…

As the sun began to dip in the afternoon and create its own colorful soup in the sky, shadows of a smaller person and a bigger person together carried a very big kettle towards the village.

The next morning, the woman arrived back to her very small house with two very small windows. She carried with her a much emptier pot, a small bouquet of flowers and a very big smile.

As she walked in the door she said to herself, "I think I'll make some soup today."

Those stupid publishers don't know what they're missing! I LOVED it... *sniff sniff* excuse me... I'm becoming veklempt

I love it!
I think you could definitely get this published- I think that you're just not going to the right places. Hang in there, this is most definitely publishable! My mum is a librarian, and this is much better than a lot of children's books.

when I first looked at the picture, I didn't see a lady with a bowl of soup. Instead, I saw what I thought was a monster of some sort. I then saw the lady with the soup...and thought the picture was one of those illusions where it actually has 2 pictures in 1.

maybe that is why they rejected your book.

It's a cliffhanger! Can't wait for the sequel.

this is very well written. it has many strong elements: interesting, engaging, lovable characters, understated ideas that are actually strong themes, and multisensory descriptions. i have a couple of thoughts about how the story could grow a bit, but am not sure if you posted this to get (kind, and hopefully) constructive feedback or not. if the story is near and dear to you as the writer and you are feeling it's complete, then so be it! if you would like some friendly ideas for development, feel free to respond.

I love feedback. It makes me feel human.

You can leave feedback here or at holyjuan@gmail.com if you wish.

Take the word Rejection out of your key words down there. NEVER give up on your dream. Especially if you know it should happen!!!
None of them are the right publishers. Keep looking!!
R