Save Money on Nasal Rinse!

Ray died today.  He was a great guy. Witty.  Clever. A master craftsman. He was thoughtful. He was a good listener. He was a great teacher.  Here’s a collection of my Ray memories. I know that I will be reminded of more in the coming days as the people that knew Ray gather to celebrate his life, so hopefully this list will grow.  Feel free to leave your Ray story in the comments or email me at holyjuan@gmail.com.

Ray was the first one to tell me about the 270 Rule, which was what ever happened outside of 270, stayed outside of 270.  While we never did anything that was 270 Rule worthy, it was always nice to have that in your back pocket.

Ray once told me about how he and a group of guys outsmarted the hotel room refrigerator.  In the early days of the convenience refrigerator, the hotel would put a plastic strap around the door handle.  If the strap was broken, housekeeping knew to take note of how many bottles of liquor or macadamia nuts were missing. So Ray and the guys unattached the refrigerator from the wall, pulled it out and took off the back. They ate and drank their fill and put it all back together.  I assume that someone a few hotel stays later had a lot of explaining to do.

Ray always sent out clever links from the internet.  Most people don’t know how to do that. Ray did.

I once had to make a relief map of .  I asked Ray what I could put on the map for the mountains.  Ray said to use Bondo because Bondo sticks to everything.  Two days later the Bondo was not sticking and I asked Ray what was up. He said, “What kind of material is that?” I said it is paper coated plywood. It’s called signboard. Ray said, “Oh, Bondo won’t stick to signboard.”  Ray!!!

I’ll never forget the look Ray had when a co-worker was cutting material on the table saw.  A strip of material got wedged in the blade and then shot backwards, slamming into Ray’s tool chest about 9” away from Ray. Without flinching, Ray slowly turned his head, raised his eyebrows, looked down and then when right back to work. That dent is still in his tool box today.

Ray was always able to help. During busy days in the shop, he’d be helping one person and there would always be someone else hovering in the distance, waiting their turn. He was a wealth of knowledge about so many woodworking topics and tools.

Ray once named once of his dogs Doug. I like to think that it was because of me.

Back at the old COSI, Ray hung a sign over the smallest closet in the building that denoted it as my workspace in the shop. It was actually the maintenance hatch for Jeb, the coal miner in COSI’s Coal Mine exhibit.

Ray told me that the only shop machine that can used to make itself is the milling machine.  I wasn’t listening, so I thought he said the lathe.  I spent years arguing with people on the road about the lathe being able to make itself.  Years later Ray was sure he hadn’t said lathe.  “Are you sure I didn’t say milling machine?” Maybe?

Ray did not have every tool in the world, but with the tools he had, he could get the job done. He’d also make tools when he didn’t have the right one.  We have one now in the shop that I refer to as the “Ray HDPE Scraper Thingy.”

I consider myself lucky that Ray’s son called me when things began to look down. The family allowed me to come over to see him, but we all knew it was to say goodbye. I didn’t know what to say. So I saddled along beside him and said that it was Doug. And he smiled for a moment, the way Ray smiled. All I could say was, “Thanks, Ray.” Then I left.

I will miss Ray, but the things that he built have been and will continue to give happiness to kids for years to come.  The lessons he taught will be passed on. He will never be forgotten.

And I’ll think of Ray, tooling around at his work bench. Trying to make something that had never been made before or fix something that someone else hadn’t made quite right. His back would be to the room and I’d pop in and yell. “Ray!”  He’d turn around and sarcastically say something along the lines of, “Oh, great.”  But we both knew how much out friendship meant to each other.

Love you, Ray. You’ll always be with us. 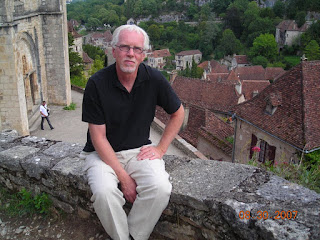 I wrote something like that a few years ago. A smartassed tutorial about writing on a website. I have never been good about listening to my own advice.

This is a story about how Fake Dispatch is killing HolyJuan.

About 18 months ago, I began a character on Twitter called Fake Dispatch. I leveraged the 500 or so followers from my HolyJuan Twitter account to get Fake Dispatch up and running. Pretty soon, Fake Dispatch also had 500 followers. And then 1000. Then 2000. I started off making up fake headlines about Columbus. My audience grew outside of 270, so then I started in with material more suited to the whole of Ohio. Soon after that, I realized I had a nationwide audience. Over 10,000 people following me. To someone like me whose ego runneth over, this is strangely addicting.

The problem with Fake Dispatch is that he siphons many of the ideas that would have gone into a HolyJuan article and squishes down into a 140 character post. Back in the old days, I would have a crazy idea about something and figure out a way to turn that into a 300 word post. A simple idea like, “Band Names from Willie Wonka All Used Up” would be thought through, run through the computer, edited and posted. Now if I have that idea, I figure out a way to squeeze that down into 140 characters. It’s much quicker. It’s much easier. It’s pathetic. Most of the best HolyJuan posts were individual ideas that were built up. Many of the ideas I started out with would evolve into something else. Something else better. Now that does not happen as much. At all.

Now Fake Dispatch will link to old HolyJuan posts as they become relevant. People think they are hilarious. Each link to a HolyJuan article contains the date it was originally posted. Dates of 2010, 2007 and back to 2006 are a testament that I've been HolyJuan a lot longer than I have been many other things.

But will Fake Dispatch kill HolyJuan? I don’t think so. Fake Dispatch is faceless and soulless. HolyJuan is my voice and has a heart, even though I can come across heartless. I think the two can live together. I'm not promising anything, but I'm hoping that I can guilt myself into being more than just Fake Dispatch.

Follow Fake Dispatch on Twitter at this link: https://twitter.com/#!/Fake_Dispatch You know where to find HolyJuan. Hopefully you will continue to find me here.

AUTHOR’S NOTE: During the writing of this article, I wandered away and posted these two Fake Dispatch posts. I lack focus.

BREAKING: Local man does not own Skyrim, so he's doing and then quitting heroin so that he knows what it's like.

BREAKING: By 2005, Al Queda knew they couldn't hurt the US by force, so they went to marketing school and now they torture us with TV ads.
No comments: Links to this post

Here's @Freckledjenn and I getting our hairs did at the Cbusr/614 Magazine meet up at Local Bar. 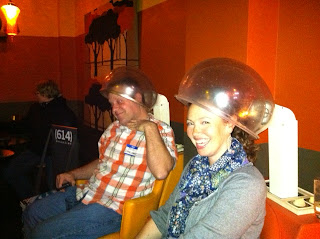