Chair for sale in Chicago

The best part about Chicago is that you can find some really great deals on furniture! While in Chicago, I was surfing on Craig's List and found the following computer chair:

The description:
A wonderful post modern, computer chair. NOT FROM IKEA.

You cannot pick this chair up. I must drop it off at your location.

Right arm suggests the confluent state of the economy. The left arm represents the whole of the ego.

Cash only. No questions. 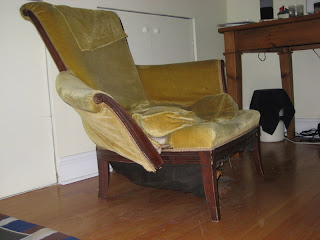 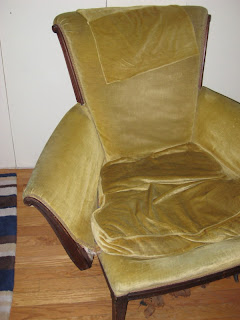 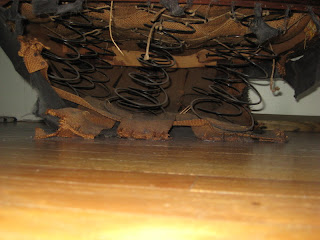 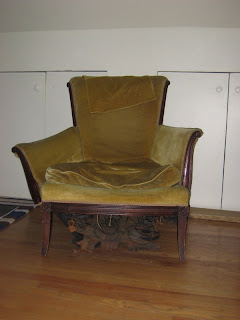 I'm hoping the seller will drive it down to Columbus.
1 comment:

Made up internet statistics up 78%

COLUMBUS-(HJ) Made up internet statistics are up a staggering 78% over the past six months, reported researchers from The Ohio University School of Internet Studies. Professor Mars Alex has seen a steady rise since the initial 22% decline of fictional statistics subsequent the elections. “Usually we notice a 10% – 15% drop in made up statistics, but 33%

of the researchers took 50% of the case studies and determined the increase. We’re 99% sure this is for real.”

Polling during elections makes up for most the discrepancies, though polls from opposing sides tend to cancel each other out. This year, fictional statistics have had a 180% turn around. “We expected to see less fake statistics with the new administration, but they’ve continued the recent trend. Internet Scientists were disappointed at the new GOP “budget” that had no statistics whatsoever. “It’s tough to make up fake numbers when the budget doesn’t have any numbers at all.” Republicans promisied 100% more numbers and a much greater percentage of fabricated statistics in their Budget 2.0.

Reasons for the increase of made up statistics are, of course, blamed on the economy. Professor Alex suggests, “No matter what the economy's doing, we’re right most the time, give or take 35%.”
1 comment:

Email ThisBlogThis!Share to TwitterShare to FacebookShare to Pinterest
Labels: statistics, The Ohio University

My newest t-shirt design at Skreened.com is a tribute to my friend Kit:

While in Chicago this weekend, Eric shared with us a story about this note: 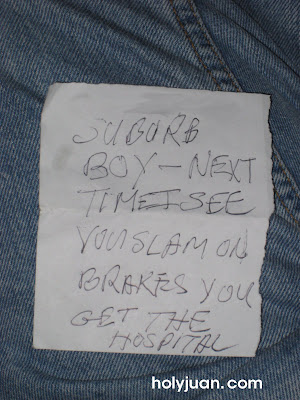 Eric was seeking a parking spot in downtown Chicago. When he found one, he stopped and attempted to back up. The guy behind him didn't like the way he hit his brakes and pulled up next to Eric to exchange words. Eric said the dude was probably in his 50s. Eric may have called him a motherfucker and finished parking.

When he came out to his car he found this note. (I smeared out Eric's license plate number which was written at the top.) It looks like it was written by a 70 year old man telling you to get off his yard.

I think the part that ticked off Eric the most was being called "Suburb Boy."
No comments:

I think the lesson here is never leave Kit alone with a can of paint and a brush. 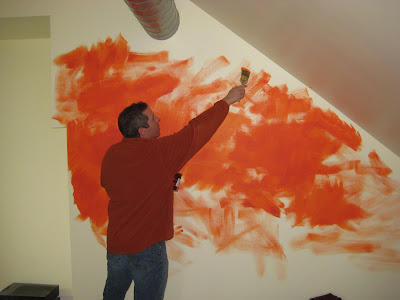 Oh. And when Kit asks about the bike shirt, just say, "Yeah, I saw it in a shop in the Loop."
No comments:

We are in Chicago

Email ThisBlogThis!Share to TwitterShare to FacebookShare to Pinterest
Labels: Chicago 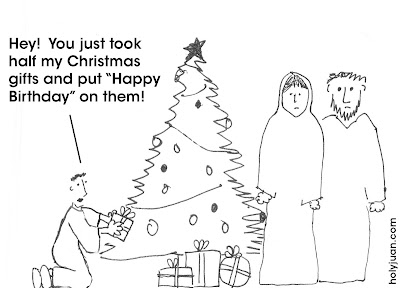 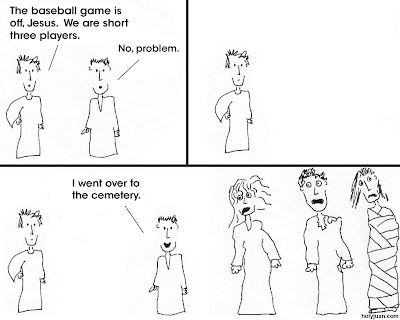 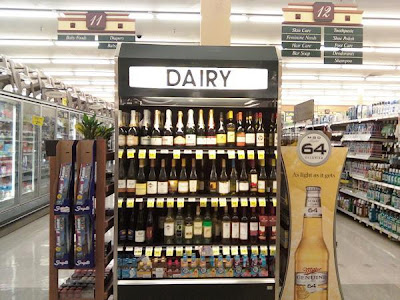 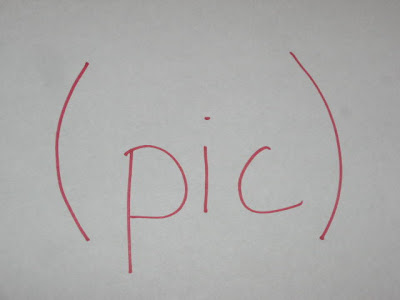 Email ThisBlogThis!Share to TwitterShare to FacebookShare to Pinterest
Labels: pic 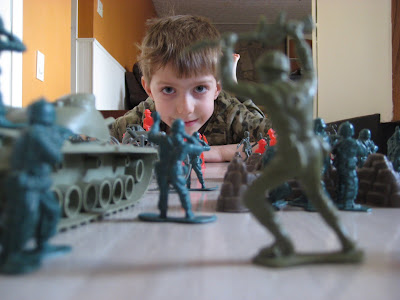 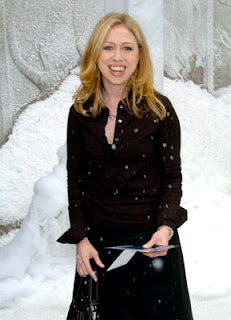 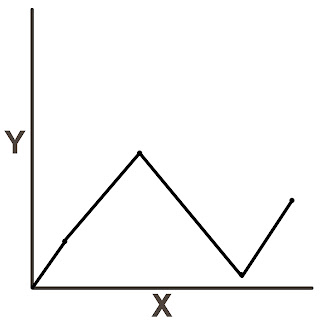 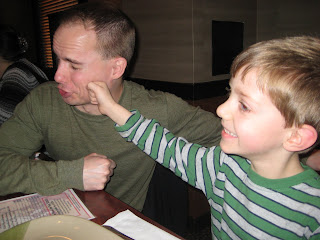 Bristol Palin for the win!
3 comments:

How big is the hole in your bumper?

Freckled Jenn made a slight spacial error and backed her car into her husband's jeep. It left a hole in her bumper. I asked her how big the hole was. She said it was $800 big. I was curious as to how big $800 was so I did some scientific studies by filling the hole with mathematically proven, standard sized objects. 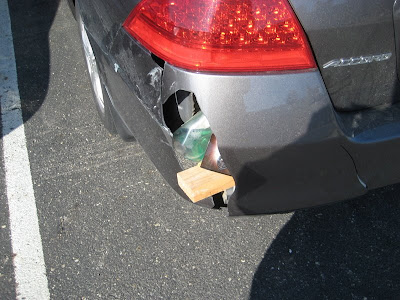 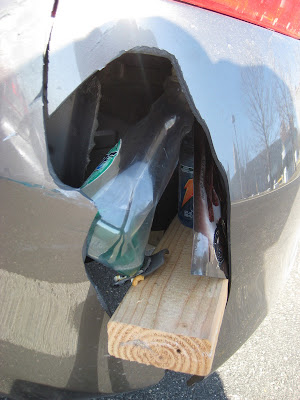 That's how big an $800 hole is. I left the objects in there so that Jenn would also know how big the hole was. 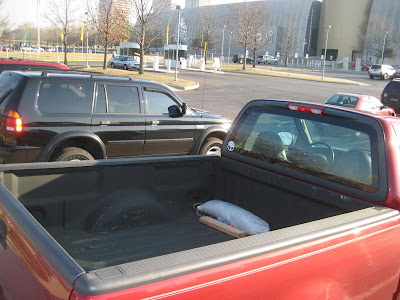 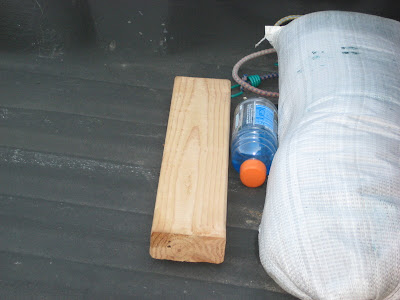 If you happen to see them, feel free to contact me for their return.
5 comments:

You'd never know it, but I love Scrabble. Here's my Scrabble name score:

I found your wrench

Several of these concrete benches line the driveway in front of my office. If you lost a wrench, I think I have found it.

The concrete around the wrench is starting to chip away. I'm sure that just the tips were visible in the recent past.

They will never miss it

Original artwork from http://www.pagetutor.com/trillion/index.html
No comments:

I have received a surprising number of e-mails concerning the "Jesus... that's morbid" cartoon asking me what the fuck is going on with it. Here is the comic in question: 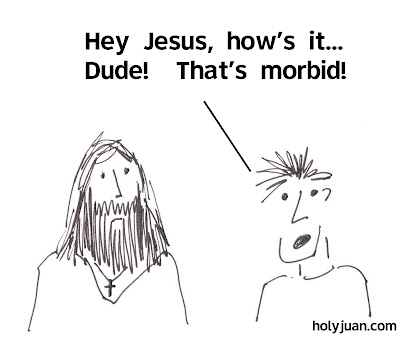 And here is an explanation: 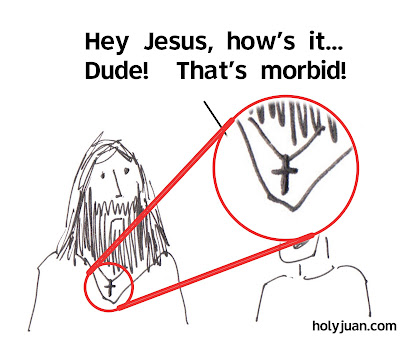 Daniel at Skreened picked my "I am a genus" t-shirt as one of his favorites this month.

Someday, I might actually sell a freaking shirt. Well, a second shirt. (Thanks, Jenn!)
No comments:

Email ThisBlogThis!Share to TwitterShare to FacebookShare to Pinterest
Labels: i am a genus, skreened, t-shirt 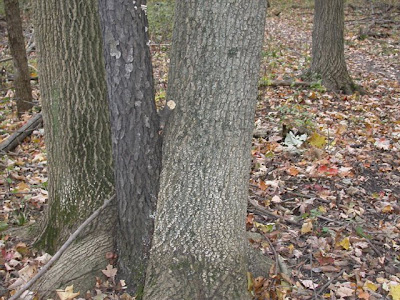 Image from American Bushman.
No comments:

Michelle is with us is spirit and in cardboard

Michelle is in New York, but she also hangs with us in Columbus.

You can read Michelle over at Subway Seat for 3.

The complete set of photos from this night out can be found on Flickr.
No comments:

Greg was hooked on the McGriddle and we couldn't afford his habit. A month in the St. Bernice of the Heathen Springs Rehab got the toxins out of his system, but the boy still craves the carbs and cholesterol.

So now we make the Cheese, Egg and Pancake sandwich. It's cheap, easy and takes less than three minutes.

Stack the frozen pancakes and microwave for 55 seconds.

While they are nuking, spray the bowl with non-stick spray. Add one egg in the bowl.

Beat the egg until it reveals the secret hideout.

Remove the pancakes from the microwave. I separate them so they begin to cool.

Nuke the egg for 20 seconds. It will still be a bit runny.

Add a godawful amount of cheese.

Use fork to help slide the melty goodness on to the pancake.

I leave the pancakes apart until Greg saddles up to eat it, otherwise the top pancake traps the heat on the inside and it remains too hot to eat for way too long.

You can also make an egg and cheese bagel using the same method. Instead of a bowl, use a soufflé dish or otherwise the egg will spillover out the sides of the bagel.

Follow all the same steps except you might want to toast your bagel. The cheese may take a bit longer to melt in the more narrow confines of the soufflé dish.

Pro-Tip: Put 1/2 the bagel insides down on the inside the soufflé dish and turn upside down instead of trying to pull the egg and cheese goodness out.

Top it and admire your work.

SUPER BONUS
Watch the nuclear abomination that is formed when egg, cheese and microwaves meet.