If It Works, It Works (Updated)

(Author's note: I've updated this story with some new revelations and photos at the end. You can skip down if you wish, but this story is good enough to read again.)

In September of 2015, a team of folks from our company traveled to Turkey to help install interactive exhibits at the Kocaeli Science Center in İzmit. In preparation for this trip, we thought long and hard about the tools and hardware we were going to take. The tools were an issue due to the 220 V / 50 Hz power standard incompatibly. The hardware was troublesome because both the metric system and we knew were going to leave the unused hardware behind and didn’t want to blow the budget buying 100 of everything we might need. Our recon team went out a few months early and discovered we would have no problem buying the tools we needed locally. The hardware we would need was also available, but our scout team said we’d need a guide to navigate the maze of hardware. We brought the hardware we knew needed, some standard hardware we knew we might need for troubleshooting, and knew we could figure something out with whatever we could find locally.

When Alpha Team One (I know that’s redundant, but it sounds cool) arrived, they surveyed the museum space, assisted the client to understand how the space was laid out incorrectly, helped to modify it, unloaded the shipping containers, and ventured into town to buy the tools we needed. AJ went with Metin, our local interpreter, to the hardware store where AJ unwittingly became a local hero. We needed a lot of expensive tools and AJ was a long-haired, full-bearded kid in a candy shop. As they drove off with the van’s shocks aching under the weight of his purchases, I imagine all the store’s employees on the sidewalk waving goodbye with big smiles on their faces and then jumping up and down and hugging one another once the van turned the corner. Word of AJ got around and for the next few weeks, because he was so beardedly recognizable, seemingly random people would yell out his name and wave to him as he walked around the city streets.

Once Beta Team Two (I know) arrived, we were fortunate to follow in the footsteps and the path cleared of brambles by the first team. They knew how to get around, when to drink tea, how to get food, and that any hardware run was going to require a dusty leather jacket, a fedora, a bullwhip, a shoulder bag, a map, and Metin. And several hours. The hardware store had hardware, but it was spread out over three floors of their building and seemed to be grouped by some arbitrary organization system that put bolts next to paint and nuts above the cast iron pipes. I’m assuming the heaviest items were located near the loading doors because when a worker tired of carrying something, it was dropped, and that became its location in the store.

Along the way, we found out that plumbing in Turkey is different from plumbing in the United States. Aside from the metric system and the normal issues that come from pipe/thread size, we learned that they use horse hair and Teflon tape in many applications where we might use two correctly sized fittings. If two pipes were not coming together as expected, they would wrap horse hair around the threads, keep it all in place with a few wraps of Teflon tape, and force the two pieces together like a couple in an arranged marriage.

I laughed at this until my final days on the project when I had my own plumbing issue. Due to a miscommunication, our team had dissimilar clear braided PVC hose pipe that came from a structure in the ceiling and needed to connect to the house water supply on the ground.  The 1” tubing from the ceiling needed a reducing fitting that would take it down to a ½” tube. We could not find anything in Turkey that could make this transition. We ordered the piece we needed, but it was three days away and we had a sign off with the client the next day. Chris let me troubleshoot this issue and here’s what I tried:

I needed something to keep the tubes in place and time to do the right thing was long past and I was almost to the point of doing the wrong thing. So I said, “screw it,” literally. I found a few screws and compared them to the vinyl pipe wall thickness. I took the screw with the coarsest thread and joined the two tubes together, making sure I didn’t pass too far through. We turned on the water and the hoses stayed together. Because the screw’s threads were far enough apart, they stayed sealed in the hose wall. I think I covered the whole mess in Teflon tape, not to keep the water in, but to hide our sins from the client.

Then I left the county, missing the client review (we passed the review and got paid), hoping that I would not be stopped at the border (a story for another time.)

Later, the correct part arrived, Chris cut out the offending plumbing, and installed the proper fitting. Instead of throwing my little Frankenstein’s Monster away, he brought it home. 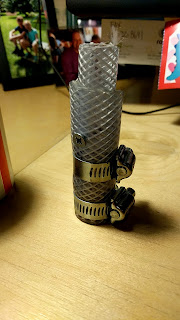 This little guy now lives at my desk. It’s a trophy. If it were mounted to a walnut plaque with a little bronze plate, I think the inscription would say, “If It Works, It Works – September 2015”.

(But then, on a small piece of paper rolled up on the inside and held in place by that screw, there would be a message to the curious. What would that message say? I don’t know… how curious are you?)

Since writing this article in March, I've taken a new position with another company. Last night, we had a going away party at a bar and many of my co-workers showed up to say goodbye. AJ was one of those folks and he said he had a gift for me.

The day after I told people I was leaving our company, AJ secretly came by my desk, took the "If it works, it works" hose assembly and replaced it with a decoy. You can see from the image below that the decoy was so close the the original that I didn't notice and brought it home in a box with my other desk crap.


Just in case I did notice, AJ slipped a note in his decoy. 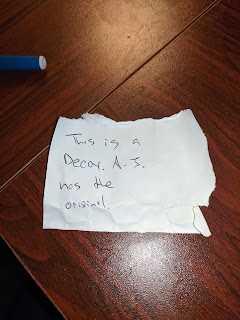 So last night at the going away party, AJ presented me with this: 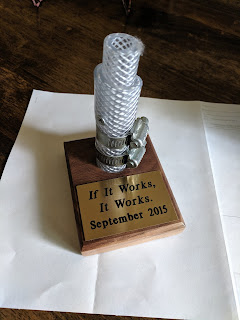 And like I said above, "If it were mounted to a walnut plaque with a little bronze plate, I think the inscription would say, “If It Works, It Works – September 2015”.

Quite possibly the most thoughtful gift I have ever received. Thanks, AJ. And goodbye. I will miss you.