I'm not sure what the answer is supposed to be... 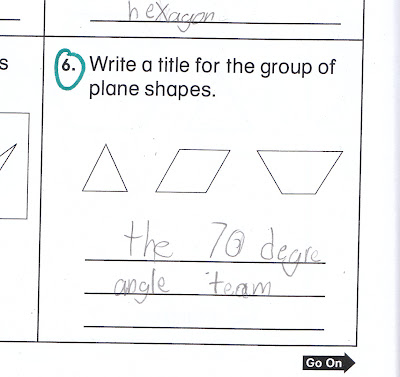 Thanks For Not Being Dead Yet

(AUTHOR’S UPDATE:  Ray was alive when I wrote this. Since his death, I’ve felt bad about how I wrote it.  I think it was my way of dealing with his illness by being aloof. So, I decided to edit it. Then, I decided not to. Then I decided to do a little of both and add this little explanation at the top, but not change anything below. I think Ray appreciated it at the time, so we’ll leave it be.)


I’m not sure if there is anything called a Thanks For Not Being Dead Yet, but I’d like to start it.

Hey Ray! Thanks for not being dead yet. I’m sure you really would have little control over whether or not you were dead, but that is beside the point. You are not dead and I’d like to let you know that I am very happy that you are not.

I met Ray years ago and we I immediately clicked. And when I say clicked, I mean he immediately took advantage of the fact that I was an overconfident 23 year old dipshit.

When I was a traveling exhibit manager, Ray would come out on the road with me and help me set up and tear down exhibits. When we were in Boston tearing down an exhibit and loading it on the semi trucks, Ray told me, “Doug, go down stairs, follow this load plan and pretend like you know what you are doing.” So boldly I went down stairs and with four union guys and the semi driver standing around I said, “Let’s get this truck loaded!” The driver said, “What are we loading first?” With sweaty palms I looked at the load plan. I flipped it around in my hands and mumbled. Then I studdered. The driver said, “Hey, what’s that guy upstairs name?” I said, “Ray?” The driver said, “Go get Ray.”

I went upstairs and sheepishly said to Ray, “They want you down stairs.” Ray saw that I was beat and left without berating me. He called me down later to show me how the truck was packed and how to deal with asshole drivers and how to listen to union guys bitch and not to worry about it.

A week later, Ray and I were in Omaha setting up the Science of Sports exhibit. We were out to dinner with Martin and while ordering food, Ray ordered what I wanted to order. I changed my order because of the Food Poisoning Theory. Ray and Martin asked about the FPT and told them that if you are in a situation where you cannot afford to have everyone go down with an illness, you must order different food. Ray and Martin laughed. Four hours later Ray called me from his hotel room. He was doubled up with cramps and food poisoning. He blamed me. I can’t blame him.

When I think of Ray, I think of him in front of a lathe, turning a piece of metal or plastic, with the stringy bits curling off into a pile of the floor. I think of Ray with a Guinness and a story about living on a commune or something awesome that one of his kids has accomplished. Ray always has a solution to a problem. It might not be the one you want to hear, but it is probably the right one. Ray was always able to follow up any of my bullshit with a similar statement of bullshittery. Ray always listens to good music. Sometimes there are bongos and I can live with that. Ray has a great laugh. Whenever I needed a tool, I'd ask Ray for it. Ray would then ask me what I was trying to do and I would tell him. Ray would then hand me a completely different tool and show me how to use it. Ray would help you to hide a body or help you to find a body if you needed one to hide.

And I will never forget when Ray told me that he was happy that he and I were going to get to work together again.

Here’s to you Ray. Thanks for not being dead yet.
2 comments:

Email ThisBlogThis!Share to TwitterShare to FacebookShare to Pinterest
Labels: ray, thanks for not being dead yet

Here's Beth and I at work. 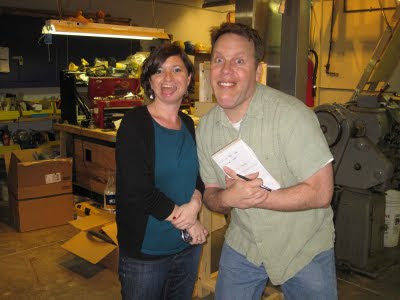 Greg pretty much nailed his Mother's Day card this year: 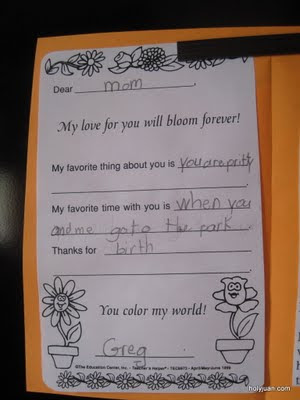 Karen and Calvin and Hobbes

Years and years ago, my little sister thought that it was important enough to cut out two Calvin and Hobbes comics and put them on poster board for me. I was in college at the time and thought it was nice of her.

Now years later, when I want to write something that rhymes, I find myself always writing to the last line of the poem in the first comic.

"Tomorrow's what I'm waiting for,
But I can wait a little more."

And when my kids call for me to go outside, I can't help but think of the second comic when I feel the urge to tell them to let me finish my really important computer crap that won't mean squat years from now.

"In ten years they won't know I'm here,
as things like cars and boys appear,
But I'll have left them with a slight
Of love my sister did requite."

Thanks, sis.
No comments: