To say that Dynamo is the greatest dog ever would be true, but Jenn and Eric know that it is better to share the sun with others than to take it all in and cast shadows. Let us just say that Dynamo is in a First-Place tie with a lot of other dogs.
Dynamo left us suddenly last Sunday. He was a good boy.
But that is not the first time that Dynamo left us. He’s quite good at it. This is Dynamo’s story about when he died the first time. And like all good stories, this one has a bear in it.
To ensure that blame is not given and fingers are not pointed, we’ve changed Eric’s name to “Bob” to protect his identity. And since the whole “Eric” thing is out of the bag, I’ll just call Bob, “Eric,” for clarity.
Several years ago, and many more if you were a dog, Dynamo adopted Jenn and Eric when he randomly followed them home one night on one of their walks. Jenn and Eric were happy to be adopted and saw many more walks and adventures in their future together. Dynamo was completely on board with the taking of walks and adventuring bit.
As part of the adventuring, Eric, his sister, and brother-in-law took Dynamo camping in Kentucky to an area called Red River Gorge. It’s a beautiful place and I highly recommend you go and check out the rolling hills, thick forests, dangerous cliffs, streams, dangerously steep cliffs, wildlife, and deadly-dangerously steep cliffs.  On a large, tree covered hill, they all camped out, went hiking, and did things that humans and a rambunctious dog on a leash can do. 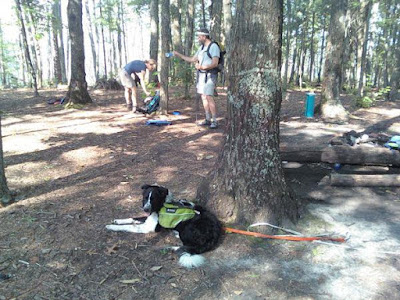 Towards evening, the adults wanted to go watch the sunset and knew the viewing area was too steep and dangerous for adventurous dogs, so they tied Dynamo up to a tree and walked up and around and around and up to a ledge that was perfect for not-dogs to watch a sunset. From their spot, they could still see their campsite across the crevice and that gave them a sense of security that they could keep their eye on Dynamo and he would be OK. And as the sun does, it started to set.
But Dynamo missed his friends dearly. They were just across the way and he wanted to be with them. He escaped his bonds and went tearing off in the direction of his friends.  Dogs at that age only know straight lines, and in running with blind joy directly towards them, he fell off a 75-foot cliff.
“Dynamo!”
Eric ran to the cliff edge. There was nothing but a huge, 75-foot drop into darkness and silence. The cliff reversed under itself and he could not see or hear any sign of Dynamo far below.
Dynamo had to be dead.
Eric looked for a way down, but the cliff edge ran hundreds of feet in either direction and only got steeper as it went in either direction. Eric and friends tried calling for Dynamo over the edge in several areas and heard nothing. With nightfall fully upon them and with a heavy heart, they headed back to camp. There was no way down from their location to the bottom of the cliff and he would need to come in from another area of the park to retrieve Dynamo’s body.
Eric called Jenn in the morning to tell her the horrible news. Such an awful thing to deliver over the phone. The three hour drive back to Columbus had to be difficult. (Especially since Jenn’s last words to him leaving with Dynamo were, “Don’t let him fall off any cliffs.”) While all three of the sad humans had to get back to Ohio that morning, Eric explained that he would head back down to the park as soon as possible to find Dynamo and bring him back.
In Columbus, Eric studied the back-road maps and trails to determine his best route to go off-path and retrieve Dynamo. (Whether or not Jenn told him not to come back if he was without Dynamo is unknown and will not be discussed outside of this mention.) But before he could head back down, there was a bear attack on a hiker and the authorities announced the entire park would be closed while the rangers attempted to “take care of” the bear. No one would be allowed in until the park was made safer by one less bear.
Days passed. The bear threat stayed orange or whatever bear threat level it needs to be to keep a park shut down.  And they waited.
After two weeks, they got a call from a ranger. While searching for the bear, there had been a dog sighting by a ranger in another area of the park. Rangers went back, searched the area, and found a dog that had about 5” of leash still attached to his collar. The collar had a Franklin County dog tag registered to a Jenn and Eric, who were owned by Dynamo. The registration had a phone number, and would you like to come down and get your extremely friendly dog?
By the time they got down to the park, Dynamo had made a few new friends, but was not hesitant to jump out of the ranger’s truck and immediately into their Jeep where he was quickly wrapped in Jenn’s arms, never to be let go again.
Dynamo was a little tattered (some scratches here and there.) A bit hungry (he lost 15 pounds.) Somewhat tired (he slept all three hours home.) But overall, a not dead, good boy.
And he remained a good boy. He was a good boy for so many people for many years. So many friends. So many walks. A new little human to take care of! So many adventures. It’s hard to have such a good boy die once, and Dynamo died twice. But that means he got to live twice, and that is more than we can ask of any dog. 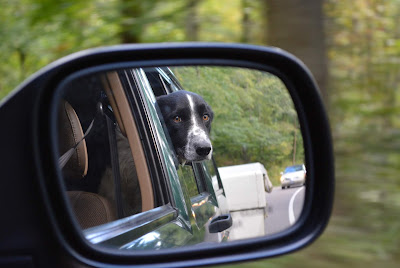