A few weeks ago, I got a message on my Fake Dispatch Twitter account from a local publication asking if I would be interested in collaborating on some humorous political commentary. Absolutely. I went to their offices and we decided I would write as Fake Dispatch and write humorous content that would be published at their online channel. I would wait until the last minute to write these pieces so that they could be as relevant as possible.

We did a test the first week to see if my content was what they were looking for. I sent them three extended Fake Dispatch posts. Their response was that they were not looking for me to write fake news but to comment on real news. I said I would make an attempt.

For me, it is difficult to write funny commentary on real, local topics, because at some point, someone's feelings are going to get hurt. When I write something made up, there is a buffer of lies between my jokes and others' emotions. But I gave it my best. That next week, I sent them a new set of Fake Dispatch "hot takes" with real, humorous commentary.

Between that first week and the second week, something unexpected happened at this local publication where they reconsidered publishing political commentary. It was an unfortunate coincidence, but Boy was I Proud of the opportunity to try this writing challenge. They said, "thanks, but no thanks" and my work was never to see the light of day.

So here it is in the light of day! Here's what I would like to do: I'm going to post the first "fake" article and its complimentary "real" piece. The last two don't align on topic, but you get the idea. Let me know what you think.

Just this week, Teh Ohio State University applied for copyright protection on the word, “THE.” At least they thought they did. Because they allowed a graduate from Ohio University to fill out the application, the woman accidentally put “Teh” on the application over 37 times. When asked about the error, the woman replied, “Oops, that must have been a typo. Go Bobcats!” Legally, Teh Ohio State University must use the word “Teh” until the matter is settled in court.

The The The Ohio State University
Don’t get me wrong; I love Ohio State. Outsiders to Columbus are not forced to don the scarlet and grey. (Though I think babies born at any university hospital are swaddled in OSU blankets and receive a block O tattoo.) But if a non-alumna does accept Ohio State into their heart, they will find themselves invited to more tailgates, asked to go to lunch more often with co-workers, and high-fived a lot in public. It’s either that or give in to the dark side and wear Michigan gear. Honestly, Michigan fans should get a lot more credit than the folks that wear OSU gear as camouflage.
I love Ohio State. But damn do they test my patience. Originally, people insisting you say, “The” Ohio State University was just silly. I refuse to do it. But then they go and try to trademark the word “The?” 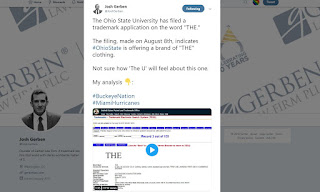 I think this means that if you have four people to spell out “OHIO,” you are going to need three more to spell out the “THE.”
Well, I’m sorry to say that “The” is already taken. (A song by the group JYJ.) And "The The" is taken by the group The The. Luckily, The The The is available and that’s what I am going to call The The The Ohio State University from now on. The The The Ohio State University.
And now I can’t figure out how to form the H in “The” with just one person’s arms. You might need eight people. Shit… sixteen if you spell The The The OHIO.


A Columbus man was injured last night after attempting to create a perpetual motion machine by taping two rental scooters together. Allen Mordigio Baskins, who asked that we would not use his name, rented a Bird and Lime scooter. He aligned the wheels, front to back and back to front and then taped the accelerator handles down on both units. The resulting explosion generated an EMP blast that erased all the high scores from the video games at 16-bit Bar. Allen Mordigio Baskins, who asked that we not reveal his name, was thrown several hundred feet and landed on, believe it or not, a Spin scooter which he then used to scoot his busted ass to the hospital.


Electric Rental Scooters are the Devil
In Columbus, you literally cannot swing an electric rental scooter without hitting another scooter. By last count, I think there are 1,335 scooter companies in Columbus. (Lime, Bird, Lyft, Spin. OK there are four.) No one says anything about it in the Bible, but electric scooters were the 11th Plague of Egypt. (And also how the Israelites got out of town so quickly.) Scooters are everywhere in Columbus. They are here to stay. They are the Devil.

They are the Devil because have you seen the people riding them with sheer glee and abandon? As they ride on the street/sidewalk/parking lots/grass/into fire hydrants, their faces are filled with exultation. They laugh. They whoop. They slalom from side to side. Even the people on their way to work have a micron of an upturned lip as they whizz down the street. Anything that provides that kind of selfless happiness can only come from the Devil. Scooters are the Devil. And I love riding every mile down the highway to hell on them.

NOW QUIT LAYING THEM ON THE SIDEWALKS YOU PUNK KID HEATHENS!

Anxious for Weed?
The State Medical Board of Ohio committee, which is empowered to recommend what qualifying conditions would allow residents to purchase medical marijuana, has decided against adding autism spectrum disorder and anxiety to the Ohio’s list of qualifying conditions for purchasing the drug. Previously, they also ruled against allowing prescriptions for opioid use disorder, depression, and insomnia.

Currently, the only covered conditions for medical marijuana are golfer’s elbow, injuries obtained during equestrian dressage, and stress induced from being a State Medical Board of Ohio committee member.

According to Columbus city officials, there have been 68 accidents at the intersection of Livingston Ave. and Barnett Rd. between 2015 and 2017.  Columbus is throwing $1.4 million at the intersection to make it safer by modifying the road width, adding turn lanes, and crosswalks. Folks, this is not going to put a dent in the number of accidents. Or I should say there will still be dents, and that number might have one, but it will still be the same number. I’m sure they had the best intentions, but I don’t think it is going to work. You know what would stop accidents there? A traffic circle. You drop a traffic circle in there and I guarantee there will not be a single accident as people drive 2 MPH in the same circle over and over and over. How do you get people to avoid accidents in the intersection? When completely avoid the intersection. I understand that many of the residents in Hillard over the age of 60 would gladly donate one of their city’s traffic circles.