Weight Loss Could Save Billions And Lower Gas Prices

ATHENS, OH - Researchers at Russ College of Engineering and Technology at Ohio University have calculated that if every adult in the United States lost fifteen pounds, the savings to the economy in gasoline alone would amount to three billion dollars over the next year. 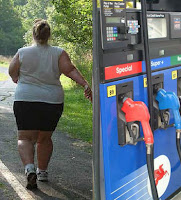 Cascading savings from the weight loss would also include fuel savings on fewer shipments of food, reduction in health care costs, as well as a reduction in gasoline demand which in turn would cause an overall drop in gas prices of approximately eight cents per gallon.

Roger Good, PhD, is the lead researcher on the project. “We Americans are hauling around a lot of extra weight. Getting rid of fifteen pounds of it will save fuel and, in turn, lower fuel costs.”

But wouldn’t the loss of consumption hurt the economy? No f’ing way says enthusiastic Ralph Connor, graduate student, “The need for more nutritious foods would replace the monetary loss from the quantity of fatty foods. Maybe the Ho-Ho people will come out with a soy version of the treat!”

Other areas of the economy would see a positive spin from the weigh loss. “You would also see a spike in the retail industry as smaller Americas seek out new clothes,” smiled Dr. Good. "Indeed, our research shows that the only business segment detrimented [sic] by a slimmer, trimmer America would be the health club / fitness industry. But really, with revolutionary home fitness solutions like Billy Blanks' Tae-Bo, Bowflex and the Hawaii Chair, traveling to gymnasiums is an idea whose time has come and gone, which ultimately contributes to further decreases in fuel consumption. It's a snowball effect."

Though the researchers do not think everyone has the willpower to stay on a diet, they believe that liposuction could be utilized to remove fat from people who are unwilling to voluntarily go on a diet. “We are working with Pacific Natural Energy (PNE) to see if we can actually turn human fat into biofuel with a device called ‘the FatBox.’” Plans are in the works for mobile liposuction labs called “Suck Trucks” which will be powered by the human bio-diesel. Connor whispers, “Some of these patients [hand gestures indicating a fatty] could power the Suck Truck for a week.”

"Nice post.submit all your posts at www.surfurls.com .Its a social bookmarking site ".

lbs = how many gallons of gas?
hey, stephen hawking!!! how much energy does it take in dollar amounts for some 240lb person to walk FAST to equal the amount of money it costs for a gallon of gas today?

Is the next step Soylent Green?