ATHENS, OH – Researchers at The Ohio University School of Foreign Economics and Petroleum Studies have predicted a major drop in oil prices with the election of Senator Barack Obama as President of the United States. Statistics were gathered from six months of intensive economic and socioeconomic studies.

Professor Martin Lynn, PhD in Economics simply stated that, “Obama has a lovely skin tone very similar to the glistening color of oil. He puts oil rich nations at ease with his beautiful, sweet crude skin.”

Skeptical, we also spoke with Dr. Knikitat Ohsruhu who had a complementary explanation, “Our trends show that with current conditions bent to conform to the existing oil markets, prices should begin reducing 25% in the fourth quarter with a drastic total drop of at least $100 in the second quarter of 2009, as long as he doesn’t get ashy under all this election stress.”

Other actions by the Obama Administration could prove effective in reducing the demand for oil. Barack pledged to a group of teachers and construction workers in Bellevue, WA this week that he would begin petroleum based hair product embargo. This embargo would require many in the African American community to go without several different types of hair products. Our in-house illustrator has created a digital representation of Barack Obama’s personal sacrifice if this embargo is successful. 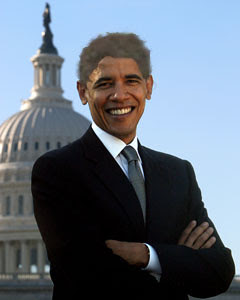 Professor Martin Lynn, PhD summed it up best, “McCain’s got that blotchy, pale ass skin. That’s the skin of pestilence and death. No one trusts a white dude with skin like that.”