The Church of Scientology Sued for Copyright Infringement

LOS ANGELES- By now, you probably have seen the slightly creepy, nine minute video of Tom Cruise discussing his infinite love of the Church of Scientology with the theme from Mission: Impossible looping every eight seconds 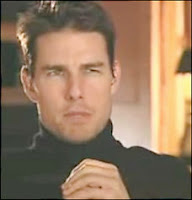 in the background. As the video spread across the internet, the distraught Church of Scientology sent out several cease and desist letters claiming copyright infringement. A day after its release, it was taken down from YouTube and several other sites also stopped hosting the video. The litigious religious cult almost was able to cull the hype.

Apparently this has backfired. Not only has the mainstream media picked up the story and shown the video in its own endless loop, but Danny Elfman, who composed the music to Mission: Impossible, is also claiming copyright infringement for his music being used without his permission. That horrible, looping in the background of the video is copyrighted and Mr. Elfman has stated through his lawyer that permission to use the music was never granted. Mr. Elfman’s lawyer filed suit in the Los Angeles County Superior Court this afternoon.

The Church of Scientology has not commented on the lawsuit. Danny Elfman's only comment was that he is in no way shape or form related to Jenna Elfman and requested that the media and blogosphere to please stop asking.

Although Danny Elfman is listed as the composer for the Mission Impossible films, Lalo Schifrin wrote the theme music:

These lawsuits take time to assemble, my guess it that this whole story is BS

Hiring a lawyer to draft up a cease and desist letter doesn't take any time to assemble. The whole point is the threaten a law suit so the web sites administrators take down the Tom Cruise video. Harassing and suing anyone that gets between the Co$ and their bottom line is a Co$ policy that's set in stone, and held as a sacred belief. Everything that was written in this story is completely plausible, and believable. My guess is that you're probably a $cientologists.

animals came from miles around..
so tired of living so close to the ground..
they needed a change, that's what they said..
life is better living on 2 legs..
but they were in for a big surprise.

they didn't know the Law

What a sue happy society we live in. Tom Cruise is a nut.

What is the Law?

Although Danny Elfman did not, indeed, create the Mission Impossible "melody," he composed the scoring to the film; essentially, he "arranged" the music. The recordings used in the film have his copyright. For example, Rufus Wainwright covered "Hallelujah" for the SHREK soundtrack. Although he did not compose the song, if someone were to use his recording of it - in, say, a vicious Right-wing evangelical recruiting tape - he would be legally entitled to file suit for infringement.

Sorry guys... I feel this whole article is a total phoney.

And who makes the rules?

Fake, as fake can be. The last paragraph, where Danny denies any connection to Jenna Elfman is ultimate proof (it's his brother Richard's daughter in law - and guess what, Richard, as well as Jenna are scientologists. Besides - Danny's material has been unauthorizedly copied and ripped off in countless commercials. He always said what a big problem that is, but also admitted to be powerless in that matter, because despite sueing the companies, he almost never gets the backing of the film studio, which OWNS the material. So it's the studio that would have to pursue legal action to have the music removed from the ad/infomercial, whatever. Correct me if I'm wrong (I could well be). In other words, I kinda doubt that Danny would get out of his way for this particular case, in order to make a statement against his brother's worldview-of-choice. From what I understand they have a good relationship with each other (sunday barbecues and all).

Folks, I cannot see how you can even consider this to be fake!!

This came from a completely reliable source. The records at the Los Angeles County Court house are searchable online so you can see that this completely fabricated story is 100% true!

And I don't know about you, but niece-in-law is not a relative in my book. Especially when it's Jenna Elfman. She's annoying.

I had been feeling really insane lately. Just so full of life's little moments and wasn't sure how to cope... until I saw TOM CRUISE in this video. After watching this video, I was completely cured! I now feel more SANE than ever- realizing what a truly insane person is by watching Mr. Impossible. Thanks TOM!

Here is the problem with this story: the CoS didn't make that video. It is a cut up from a video they made in 2004. They probably didn't use the MI music in the original vid. I'm pretty sure if Elfman was going to sue anyone for copyright infringement, he'll end up suing the same people CoS is/did.

Owner of the recordings has the right to file suit for copyright. It doesn't matter who composed this and that, its has more to do with who owns and has the rights to the recordings. Danny Elfman purchased the write to use that original composition in order to use it in Mission Impossible. That being said, since it is his property and his works were used without his consent then he should win this case easily. Also, if he isn't a scientologist his works are being used to promote a religion he doesn't endorse. Scientology is falling!!!!

keep on rockin in the (not so)free world

Come to think about it Danny Elfman is actually married to Bridget Fonda,aka Jane Fonda's paternal aunt who im guessing are all Scientologist who i personally don't understand how they can continue to be a tax free organization when it's clearly a cult i don't care about any of these hollywood actors and actresses who have been literally getting away with murder pedophilia human trafficking money laundry etc, so technically the money should be taking away from all of these hollywood elite's who believe there better than everyone else an given back to the victims and the families of the victims. Aka i don't care i don't know how i wound up on this site when i was actually trying to get to the bottom of a documentary about Jim Jones, that mention that Jane Fonda was a big supporter of Jim Jones aka koolaKoo Massacre this is even more appalling an absolutely despicable disgraceful 😥😥 😥

It definitely needs to be investigated that's for sure good lord. SMH 🤕