I was just at Target to pick up some toothpaste and Coke. The first display I saw was 12 - 12oz cans of Coke for $3.33. The big red numbers really attracted my attention! 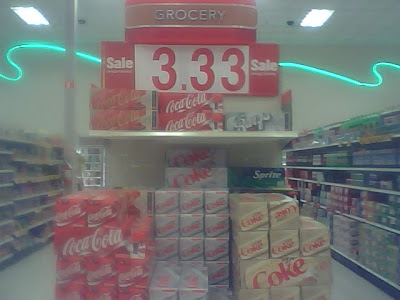 On my way to the check out, I noticed that there were other Cokes for sale, but at a higher price of $3.99. I took a closer look and found out why they cost more: there were 8 - 8oz. cans instead. 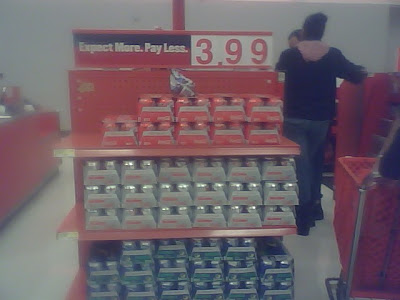 I'm not sure what you do with an 8oz Coke, besides drink two of them, but it seems a bit off base to sell them at three times what the twelve ounce Cokes cost. I decided to update the Target tagline in this photo to reflect the pricing. 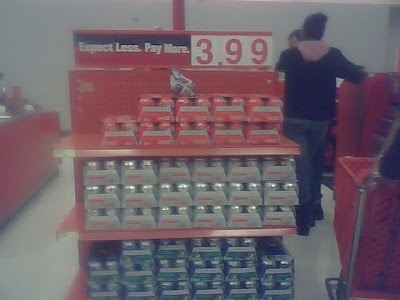 There is a moral to this story. Being the smug, self centered jerk that I am, I actually did not buy either of these two items and instead opted for the cheaper 2 liter bottle of Coke for $1.69 because 2-liters are always cheaper than the canned stuff.

I should have bought the 12 oz cans!

seems a little foggy in there was the place on fire

Shitty camera phone. It was in my pocket and I was sweating over thinking about the rum that I was going to pour in my coke.

I suspect the actual cost is higher -- aluminum costs and 8oz cans have less economy of scale.

As for the audience... mixed drinks and people used to 8oz servings. And women who also collect miniauture things.

I am always confounded by why the little cans cost so much more. They were clearly made for me, as I almost never finish a whole can of soda, but I never buy them because they are so expensive. Yet, since I never actually finish a full size soda, is it actually costing me the same as if I had bought the tiny cans?