I had to get a PPD or tuberculosis (TB) test done the other day. The tech said there would be a small prick as she shoved the needle sidewise into the subdermal layer. The goo she pumped into me would react to TB and begin to get red and fester if I was positive. When she withdrew the needle the injection site bled a bit more than she thought it would. She stuck on a band-aid, told me to come back in 48 – 72 hours, slapped me on the ass and I was on my way.

I showed the injection site to my co-workers. There was a dark bruise where the needle had gone in. I said that was not a TB reaction and more from the needle. I told them they would know if it was a positive test. We looked at positive results on the internet. The positives ranged from a silver dollar sized discoloration to a fist sized, red, angry blotch. I wasn't worried.

I didn’t have time to run into the doctor’s to get the injection site checked at the 48 hour mark so I decided to wait up until the 72 hour mark. Three of my co-workers were in a meeting and I decided to play a joke on them. I went to Steph and asked her for any makeup to create a false positive on my arm. She said she didn’t have any (or that she didn’t want her make-up on my arm,) but directed me towards the oil pastel “crayons” at the drawing table. I used some red, orange and brown to make a pancake sized blemish around the injection site. The pastels were hard so I needed to mark a dark line and then rub the area to spread it out convincingly. I showed my work to Steph. She shook her head and got the pastels back out and made my crappy attempt a lot more tuberculosisy. Then I waited. 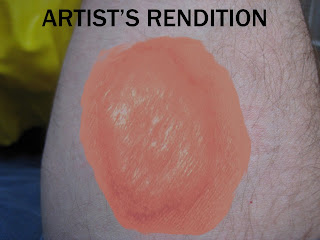 When the boys got out of their meeting, they gathered around Clair’s desk. I walked up and reminded them of the injection. Then I pulled up my sleeve to reveal the "festering" site.

They were torn between shitting their pants and clenching their butt cheeks, did neither, and instead stared open jawed while slowly leaning backwards 5 degrees. I expressed my own disbelief and that I didn’t know what to do. We all asked questions that no one answered. I finally said, “This looks like I took pastels and drew on my arm.” They said it did. Then I said, “No, I mean it looks like I drew on my arm with several colors of pastels.”

Erik got it and so did Michael. I think Keegan figured it out around Friday.

We had a good laugh and I washed off the pastels. It took a good bit of scrubbing, but I got it cleaned up.

Miss Sally was working late and then went out for drinks with friends. I was at the computer when she came home around 11pm. While talking to her she grew alarmed and said, “What’s up with your arm?”

At the injection site, the smallish bruise had expanded out to about silver dollar size. I assumed it was from the rubbing on of the pastels and the scrubbing off of said pastels off.

“That looks like a positive result.” Sally would know. She and her team have to get tested every three years. She's seen a positive result before. I said, “It’s just the bruise.” But then I looked again. The bruise was there, but it had definitely spread out. And it started to look red. And slightly angry. Sally asked, “Did you get it checked?” No. “Are you going to?” Yes. Tomorrow.

And she went to bed.

I stayed up and looked up positive TB tests on the internet. They started to look a lot like mine. Then I looked at what I would have to go through the next six months on antibiotics. With no drinking alcohol. HolyJuan wept.

It took me a long time to fall asleep that night.

I went to the doctors first thing before work. I checked in and went to the tech’s area. The girl who gave me the shot was there. She said she remembered me. I said that I remembered her and stuck out my arm. Her eyes shot open wide. “That’s a big bruise!” 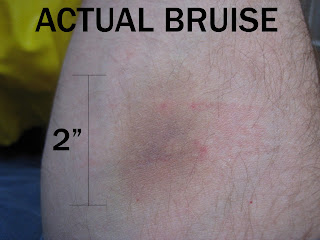 A bruise? It’s not a positive result? “Nope, you are ok. I remember that you bled after I gave you the injection. That’s the biggest bruise I’ve ever seen from a TB test.” I assume that most people do not rub and scrub their TB test area while fucking around at work. I think I aggravated the bruise a bit. I wasn't about to tell the tech.

I put down my sleeve and smiled, “Yeah, it’s almost like I put marker on my arm.”

I don't understand the medical profession's obsession with injecting people to see what reacts, changes color or leaks.

After an accident two years ago a doctor injected my knee with silicone goop to see if I had ruptured the joint. I don't know what the composition of silicone goop is but I'm pretty sure it's made from PURE, SEARING, WHITE-HOT AGONY.

Seriously, there has to be a better way to do this kind of thing.

That is pretty amusing, pretty funny that it backfired on you :) That is what you get for playing with peoples heads haha

Signed,
The gullible one that always believes peoples jokes!

Dang, my very next "Ask Holy Juan" question was going to be: "How do I fool my co~workers into thinking I have TB?"

But now my question is: What the heck kind of profession do you work in that you have to get routinely tested for TB?????

I hope they are paying you well!