COLUMBUS, OH – There were rounds of high fives and chest bumps at an undisclosed Republican office this Monday night. They were celebrating a successful viral attack on local Democrats. Mr. R (not his real name) was beaming with pride, “We got word from the HQ that we were to do everything possible to get McCain elected. We think we pretty much nailed it.”

Mr. R reported that his next door neighbor, Mr. C (not his real name) heard about a subversive act in other cities to trick Democrats into voting on the wrong day. They decided to try it and in Mr. C’s words, “It worked like a charm!” The two posted signs all over the neighborhood stating that there were too many people voting and that the voting would be split up over two days. We found hundreds of these signs over the Columbus area. 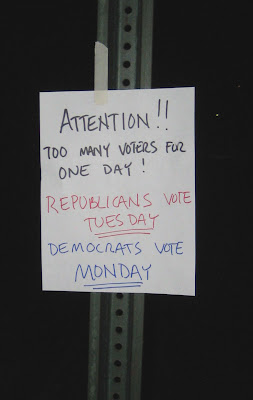 Monday morning had Mr. R and Mr. C wearing camouflage and hiding in the bushes, counting hundreds of Obama supporters heading to the polls. They laughed as they passed the binoculars back and forth all morning. “We don’t feel bad for anyone that is stupid enough not actually vote on Election Day. We’ll be laughing it up tomorrow night when the polls close at midnight.”