CHICAGO, IL – Speaking to a crowd of reporters this evening near President Elect Barack Obama’s office, Robert Gibbs announced that Obama was recanting his appointment of the Secretary of State position to Hillary Clinton. “We are disappointed to announce that due to a clerical error we must withdraw the offer of the position.”

All this week, Washington has been abuzz with the prospect of once opponent Clinton becoming one of the highest regarded positions in the new administration. Obama has repeatedly waved off speculation about the appointment by saying, “I do not believe this to be a very big deal.”

But earlier today during a Q&A session with the President Elect, it seemed that reporters pressing for more information about the Secretary of State appointment caused Obama a bit of pause and he called Robert Gibbs over for a private meeting. Hours after the meeting, Gibbs made the announcement that the position is still open. “It seems that when President Elect Obama was asked to think about what role he wanted Hillary to take on in his administration, he wrote down the position on a piece of paper and handed it off to an aide. The aide misunderstood what was written on the paper and we apologize for the confusion it might have caused.”

Our sources were able to dig the discarded piece of paper from the Presidential Elect Official Recycling Bin. The contents of the note are shown below. 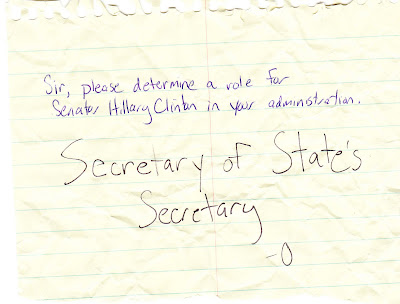 Really from the recycling bin???I would expect the President Elect to pick Hilary for a very important role in his cabinet. If not Secretary of State then what???

So intriguing that Barack signs his notes with a simple "O." Are we sure we didn't elect Oprah's alter identity?