Ohio Court Pays $2,500 a Day for Black Man to have White Man Make-up

LANCASTER OH (HJ) – Trevor R. Smoot, 38, was picked up for attempted burglary on October 21st. Before his appearance at the Fairfield County Courthouse, his defense attorney demanded that Smoot be given an opportunity for a completely fair trial in front of an all white jury. To this end, the lawyer requested that Smoot, a black man, be allowed to wear make-up that made him look like a white man. The court reluctantly agreed, but found itself in a bit of a legal loophole that requires the court to pay for any necessary accommodations for “mei capilli sunt flagrantes” or fair trial without cost.

Recently, Florida murder suspect and neo-Nazi John Ditullio found himself in a similar situation. Every day before court, he spent the hour before his trial in a $125 makeup session, paid for courtesy of the state. His make-up was to cover up Nazi tattoos on his face and neck. Smoot’s lawyer sought the same type of make-up to protect his client from the possible racism of an all-white jury.

At a cost of $2,500 per day, a special trailer has been brought in that houses his make-up artist and the special tools needed to turn Mr. Smoot into a white man. Del Donkins, special effects and make-up artist has worked on such films as “Mrs. Doubtfire 2” and “Shaving Ryan’s Privates.” Mr. Smoot arrived on the first day of trial at 4:30am to begin his make-up session. In about four hours the transformation was complete. To the unknowing jury, he would look just like an every day, ordinary white man.

In the courtroom, as the prosecutor began to present his case, there was a rumbling amongst the jury. Judge Frank Masterson called for order and the foreman was brought to the bench. A few minutes later the foreman returned to the jury box and announced that the jury could never find such an innocent looking man guilty and asked that all charges be dropped. The judge had no other recourse but to drop the charges.

Here is Mr. Smoot’s reaction to the jury’s decision. 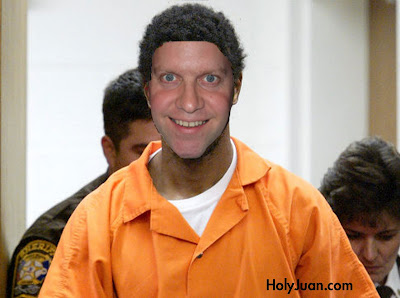 I don't know if this was fact or fiction, but it was brilliant nonetheless.