I’m a bit late on this, but I had to get the photos together… you’ll see.

At 10:00am on Wednesday, I caught the shuttle to the E3 conference. There were a lot of folks from the Kawada Hotel going to the show. It was interesting to eavesdrop on people discussing their previous day’s dealings with Sony and Nintendo and debate on whether the show was better/worster/lamer/unawesomer that last years show. I was an E3 virgin, so to me the show was fantastic. I can see how the show could get old over time, but it’s not yet!

Right as we got to the Los Angeles Convention center, we noticed a group of 10 or so folks protesting the show. 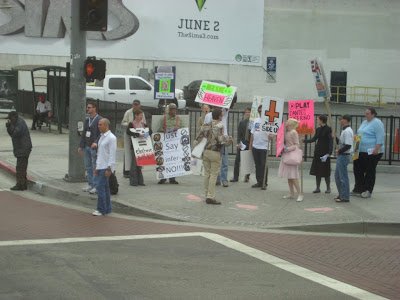 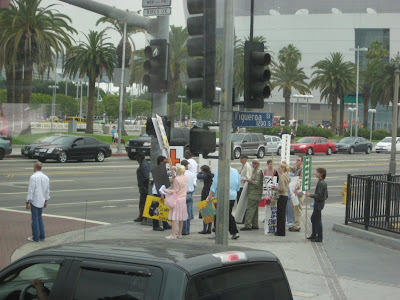 Here's a sampling of their signs:
Turn Your PlayStation into a PrayStation
I’ll get my high score in heaven

(author’s note: what we didn’t know at the time was that this was a clever marketing ploy by a game manufacturer. It kinda worked because there was some buzz about it, but I’m not mentioning their name here because I’m a dick.)

My original E3 plan was to scout out the whole show on day one and dig in on day two. I got most of the conversations I wanted to have completed on the first day, leaving me all of day two to play. That was until I realized that I missed the entire West Hall, known to some as the other 50% of the show, and my plan was squashed. The West Hall had Nintendo and Sony. I did a quick walk through of the West hall over the next two hours and then decided to get some play time in. I bee-bopped from area to area, observing some games and playing others. I played Wii games with a bunch of strangers and we all had a lot of fun. This is also where I met Nintendo employee, "Cherry" (made up name). An extremely hot red head with cherries tattooed on her wrist... yowza! She played the new co-operative Mario game with us. I, newly official creepy guy, snapped this photo of her. 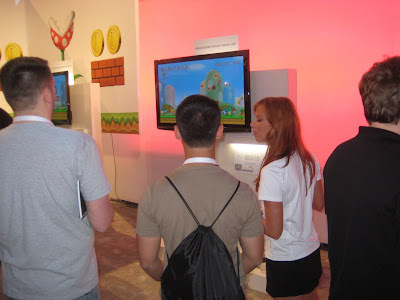 The rest of the day was a blur. I stuck around until 5:30pm playing games and checking out the taping of Attack of the Show. I got my photo taken next to the G4 stage in the photo area: 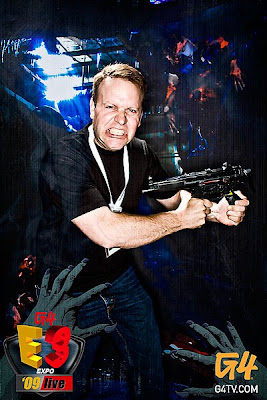 Later that evening, I drove up to Sunset Blvd and had dinner with Lacey at the Bowery. When I asked Lacey for directions, she suggested I park at the ArcLight Cinema so that I could get my ticket validated.

Here are Lacey and I after dinner: 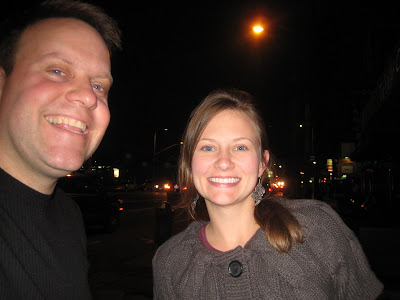 As we walked to the side entrance of the ArcLight, Lacey mentioned that she had seen Drew Barrymore and Justin Long there before and that they were shorter than she expected. Our timing was perfect as a movie was letting out as we were walking in so we would blend in with the crowd and no one would be the wiser. As we stood in line to get the ticket validated, I noticed that Drew Barrymore and Justin Long were standing in front of us. Lacey was chatting away and I kept giving her the wide open eyes and pointy finger. She said what, “What?” and then “Oh!” The validation dude was taking way too long and Drew and Justin skipped out. It pays to be famous. By the way, every actor in Hollywood is about 5’ 7” tall. I was a giant and some worshiped my large head as a stone idol.

Lacey and I parted ways and I went back to the hotel. I had a 9:35am flight and for about ten seconds, I pondered getting up early and taking the 6:35am flight. I quit pondering and fell asleep around 11:00pm.

I shot out of bed. Something was wrong with the TV and it was creating extremely loud feedback. I searched for the remote. Then I realized it was not the TV, but the fire alarm. It was louder than fuck. I was right on the street and could see out the window. Nothing; no fire or smoke. I got on my pants and shirt from that night and slipped on my shoes without socks. In the hallway, people were pissed. Some people were just getting back from a full night of drinking and were laughing. I’ve been in a high rise fire before and didn’t stick around. I went down the hall looking for the stairwell. The only stairwell I had seen was the emergency metal stairs on the front of the hotel. 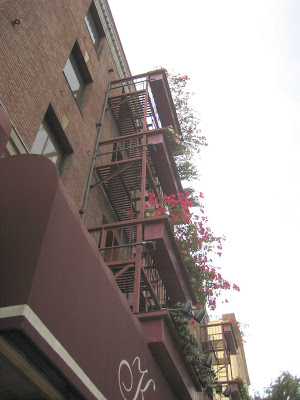 I didn’t think they could be the only stairs, but as I headed down the hall, I asked the people I saw where were the stairs and the people getting on the elevator (yes, getting on the elevator) said they could not find them. All the emergency doors had magnetic locks on them and they all shut automatically when the alarm sounded. The whole place was a maze of closed doors and I decided to bail out the front stairs. As I stood at the top of the stairs, the first four of eight fire trucks showed up:

We stood at the top of the stairs as the firemen scampered off the trucks and into the building. I yelled down to ask if it was safe. Someone yelled up, “They want you to come down.”

So we did. Three flights of metal stairs down to a counter weighted ladder that dropped down. The people below us wouldn’t get out of the way until the ladder started coming down and then they found other places to be. When I climbed down, the ladder was all over the place, so at the bottom, I held it for the people climbing down. That’s when this photo was taken by @traceyjohn 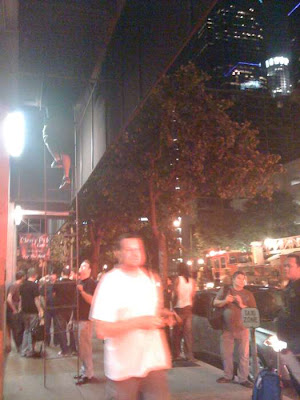 A few moments later, they let us back in. I went up to my room via the elevator and went around, opening the doors back into their magnetically open positions, thus releasing several stuck guests who could figure out how to open the doors. I went to bed, but I couldn’t sleep. I was up until 6:00am when I took a shower and finished packing. I spent the next 12 hours trying to get home after my 9:35am was delayed and I missed connecting flights.

All in all it was a very fun and positive trip. I got to talk to some interesting programmers and designers and I got E3 out of my system. I hope to go again someday for completely different reasons.