{Author's Note: This is a repost from several years back, but I thought you might want to read about the fire I was caught in years ago.}

When you are on the road for long periods of time, one of the only good things you have to look forward to is the peace and safety of the place where you sleep. While I was traveling, I had contacts through the museums and I could find a nicer place that normally wouldn’t rent for a short term. For those four months, I had a small, comfy nook to hide.

In Omaha, things were different. The museum I was working with decided to save money by putting me up in an apartment building just down the street. If you are familiar with museums, you might know that they are usually built in the shittiest part of town so that:
a. it’s cheaper rent
b. it’s a cornerstone for other business to build near to revitalize the community

This eleven story monstrosity was the second cousin once removed of the projects. Vagrants were always loitering about the front. Trash everywhere. The fire alarms were always falsely sounding. The walls were paper thin. (I didn’t have any sex, but I listened to the neighbor lady get her socks knocked off.) It smelled like other people's food. The elevators worked as long as you wanted to go down. The only difference from the projects was that the front doors locked. At any time when you unlocked the front doors, some dude would be there, mumbling to you about losing his keys and needing to get inside. You would have to pull the door shut to keep them out. There was a pile of fingers in the foyer where they hadn’t quite pulled their hands out in time. When they did sneak in, they would make a bee-line to the basement and the warmth of the laundry room. At least the bums were Downy Fresh. 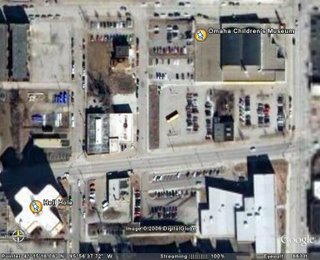 I lived on the very top floor of the shit hole.

On December 31st, I woke up to the sound of the fire alarm. It wasn’t the first time. My clock showed 6:00am. At first I was pissed, but then I remembered that I was going to drive down to Joplin, MO after work to party with my buddy Don, who was a reporter at a Joplin television station. I thought I might score some weathergirl action. As I laid there thinking about how I could get out of work early that day, the fire trucks pulled up.

Now, don’t panic. The fire trucks always pull up when the alarm is pulled. Some law, I’m sure, that says no matter what, when an apartment alarm goes off, the trucks have to check it out. They always drive up on my side of the building. A dude jumps off the back and walks into the building. Five of the other guys loiter around the truck until the first guy comes back out and they head back to the fire station. Clockwork.

So, the fire trucks pull up. Everyone jumps out. Dude runs in the building. The loitering guys start to pull hoses off the truck. Ha. Funny. They hook the hoses up to a series of hydrants and start to unwind other hoses from the truck and run them into the building. I started to do the math in my head. I also started to smell smoke.

I opened my window and was hit with cold air and again, the smell of smoke. A bit stronger now. I could see other people sticking their heads out their windows. They seemed to be doing the math as well. I decided that I should get the fuck out of the building.

I put on some pants. A shirt. A jacket. I also grabbed a book and my car keys. Shoes on and I was out the door. The fire stairs were to the immediate right of my door and I thought I’d walk down the eleven flights of stairs and hang out in my car. I looked down towards the elevators and saw the most horrific, beautiful sight. Dark smoke was squeezing out of the elevator shaft and coating the ceiling. It rolled over itself like an upside down wave hitting the beach and chased on the ceiling down the hallway. It was building upon itself and thickening, filling the hallway with haze. I began to tell myself not to panic. The fire escape stairwell would be safe. I mean, it had a big red door. That’s safety if I ever saw it.

I pushed through the door. The fire escape was filling with smoke from below. Oh fuck! I went down to the tenth floor and the smoke thickened (duh.) I yelled down, “Is it safe to come down! Where is the fire!” No one answered. I covered my mouth with my shirt and went down to the ninth floor. As I went down one more floor, I couldn’t see my hand in front of my face. I was coughing and couldn’t breathe. My eyes welled with tears. I turned around and ran back up the stairs. I was in pure panic mode. I was unable to process the current situation. I was breathing hard from running, but it was really the start of hyperventilation. I reached my floor and fumbled for my keys.

Luckily for me, the chick next door burst out of her apartment and was somehow panicking a lot more than me. She had her kid’s head under her arm and was squeezing the crap out of her. I got to see a dude run out of her apartment and check out the fire stairs filled with smoke and then run down the hallway to the other stairs. In that moment of clarity, I realized that was the dude she was banging all the time.

Whether it was seeing the woman panicking more than me and needing help or thinking about that dude banging her, my head cleared and it all became very, very simple…

I gave her an update: The stairs are blocked. You cannot use the elevators. Go back in your apartment. Stick wet towels under the door. Wait for the firemen to rescue you. Be ready to go. Put on socks (yes, I know) and shoes and your jackets.

Dude came back and said the other stairwells were filled with smoke. I repeated what I said to the woman and he went inside.

I went inside my apartment and did exactly that.

At the windows, everyone from the 5th floor and up was yelling back and forth. Someone was on the phone with 911 and they were sharing information by shouting what they learned from the 911 operator. The fire was on the 4th floor. It was being contained. The firemen would come and get us. Stay where you are.

With nothing better to do, I called my co-workers from the museum and friends at home to tell them I was in a fire. No one is very excited to listen to your fire stories at 6:30am.

There was a knock (er pounding) at the door. A full wall of smoke roiled in as I opened the door. An actual fireman in a mask was standing there with an axe. He said (in that muffled mask voice) to take the stairs. He placed a gloved hand on my shoulder turned me towards the red door. That hand left a soot mark on the shoulder of my jacket that never came out.

The stairs were clear of smoke and I went down eleven flights and into the fresh, smoke filled morning air. They had giant fans in the stairwell to evacuate the smoke.

As it turns out, two drunk dudes with eyebrows made breakfast before passing out. They neglected to stay awake long enough to eat the food or turn off the stove. The fuckers did wake up in time to throw water on a grease fire and it spread though the kitchen. The two, now eyebrowless, dudes ran out of the apartment and didn’t shut the door. The fire took out the apartment and spread to the hallway. The fire doors at the ends of the hallways didn’t seal and smoke filled the emergency stairs in minutes.

The only losses were the apartment, the hallway and two pairs of eyebrows. My invincibility was also a casualty. If I am anywhere and an alarm goes off, I leave. I was humbled by my ineffectiveness. I know I came around in the end, but for those fifteen seconds of running up the stairs, I was completely worthless.

I used the fire as an excuse to leave work early to drive to the party in Joplin. Luckily I did leave early as bad weather rolled in and it took me an additional two hours to get there. On 29S on the way out of Omaha, a truck jackknifed right in front of me, blocking the entire road. Jumping out to see if he was alright, the swearing driver said he was fine and I got back in my car and drove through the snow filled median and around his cab. No other car followed me and I was alone for a long stretch.

I made it to the party with four minutes before the ball dropped. I did not get to bang the weathergirl. 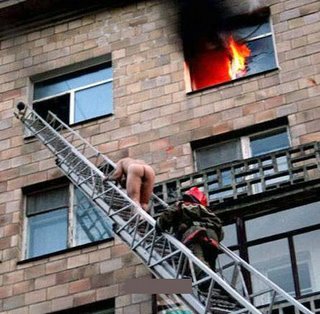 That was a good one!!!Wow.
I once got banged in Joplin, It was at a mangers convention and there was alot of seagrams involved so the details are a bit fuzzy. But it was definitely Joplin.
Now I will have something different to think of everytime i go through Joplin.
now tell me about the girl you dumped ......