CHICAGO (HJ) - American Airlines announced a cost savings measure today that has passengers up in arms and they are literally not taking it sitting down. Airlines have been cutting fuel costs by reducing weight on planes through baggage restrictions and cutting back on provided amenities such as food and blankets. Courts have struck down attempts to charge passengers by the pound so a different route was required. 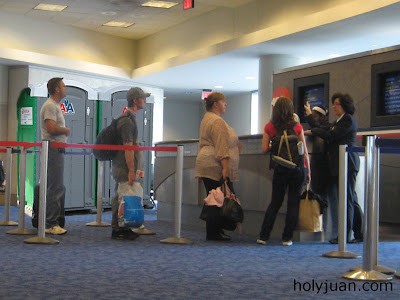 Passengers are instructed on how to use the porta potty measuring device.

I LOVE it! I knew it would come to this one day.

The problem with this is that someone from AA may read it and think it's a good idea.

This is only a half-measure. True equality will be achieved when they charge by the pound like Fedex.

this is hysterical...hopefully it remains in the "hysterical" catagory and doesn't become reality!