This is My Suitcase

I've said it before, I'm no music critic. I know what I like and that's about it.

I first saw "This is My Suitcase" at "The Hot Damn" CD release party last year. I wasn't too impressed. I went away thinking they sounded OK and that they were kooky as all get out, but not my style.

Fast forward a year and the Hot Damn has broken up and I'm in queue to see "Margot and the Nuclear So and So's" at Circus in Columbus, OH. This Is My Suitcase was in the lineup for the night. I was all hopped up on Margot so I thought I'd give them a second chance. 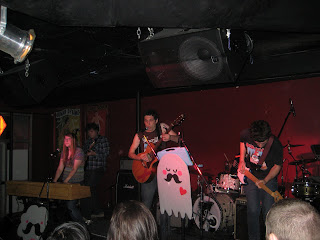 They were awesome. They were really on and their set was very tight. They were modest and interesting and fun.

The lead singer of Suitcase was all over the place; instrumentally, vocally and physically. All of it looking and sounding great. The keyboardist was as demure as before and the rest of the band played into the lead singer's energy.

In speaking with the lead singer later that night, he remembered the Hot Damn release and remembered it being a crap show. I forgave him.

Check out this video promoting their May 2009 Tour


This is My Suitcase is playing Friday night at Comfest, 7:00pm at the Bozo (main) stage. You should go check them out.

Some links for you:

Email ThisBlogThis!Share to TwitterShare to FacebookShare to Pinterest
Labels: circus, comfest 2009, Margot and the Nuclear So and So’s, This is my suitcase