New York (HJ) – In front of a busy Sunday saleroom and crowded telephone bank at Sotheby’s New York today, against a pre-sale estimate of US$300,000 - $450,000*, President Gerald Ford’s artificial leg was the subject of intense bidding between several American collectors and Scandinavian Royalty.

President Ford lost his leg in a boating accident in 1946. The loss of the limb was 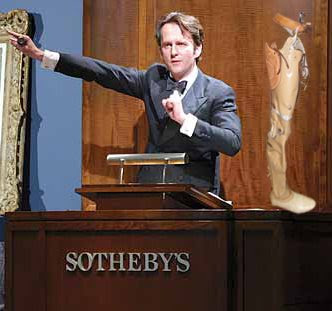 kept secret from the public, especially during his political career. Gerald R. Ford Presidential Library and Museum historian Mary Hasston was at the auction and gave some insight into the history of the limb, “Many thought President Ford to be a clumsy person and those people might feel a bit silly knowing that the President wore an artificial leg. Mrs. Ford and I were the only people outside of the White House that knew of the limb.” She recalled, “He kept a bottle of Dewar's White Label Scotch Whiskey in a secret compartment of the leg. The half empty bottle was removed prior to the auction.”

Talking about the prices achieved today, Rufus Kessler, Sotheby’s International Head of Artificial Limbs, Eyes and Hair commented: “We’re greatly honored to have been given the opportunity to provide this rare item to our members. Hopefully someone will put it to good use.”

After an intense bidding battle between at least three bidders; it was eventually sold to an antiquities dealer from Pittsburgh, PA who asked to remain anonymous. Mr. Kyle Deeds did state for the record that he was going to turn the leg, “…into a lamp or a hat stand. I hated President Ford.” The final bid for the artificial leg was $1.3 million.

The price represents a new auction record for a Presidential artificial limb. Only one other Presidential Artificial Limb exists and that one is buried with President Gerald Ford.

You seem to be forgetting James K Polk's artificial nose.

Polk's nose was a baboon transplant which is technically not an artificial limb.

Damned Scandinavians, always after our appendages. Some Conan wannabe is building a Hibernian throne of fake legs and hearing aids right now.