CRAWFORD, TX (HJ) – The first three months out of office are being called a success by former President George W. Bush. “I’d pretty much call my retirement a slam dunk so far,” remarked the former President from Crawford, Texas. Former President Bush allowed us to sit with him for a moment while he whittled on the front porch of his ranch. “I’m thinking that my approval rating has gone up at least.” 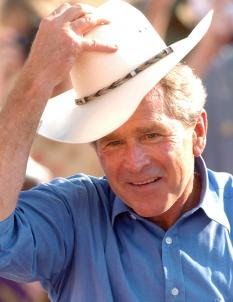 schedule or priorities haven’t seemed to change that much. “I really don’t notice that I’m not President anymore. There’s really not a lot of difference in my days. I did some paperwork. Spoke on the phone. Messed around with the electronic etch-a-sketch. I think we are going to have ribs for dinner.”

Former President George W. Bush was very clear that there were some things about the Presidency that he did not miss, “The meetings… whoa boy there were a bunch of them. I have just recently begun to learn to listen when people are talking. Eight years of tuning out sticks with you.”

The former President was not completely forthcoming when asked about how President Barack Obama was doing so far. “I’m sure he’s doing just fine. Things at the White House always seemed to run on auto-pilot anyways.”

When asked about the future President Bush said that he hoped he would still be invited to throw out the first pitch at baseball games. He was also a bit unsure of the role of the Secret Service, “I thought the guys in suits would leave after I left office, but they are still around. They’re still good for fetching ice tea.”