A few weeks ago, a number of folks at work joined in a “The Biggest Loser” competition. We were split up on teams that were named by color. Red, blue, black and so on. I’m on the Black Team. As part of the Black Team, my job is to create viral interference and lay down a steady stream of practical jokes and humorous e-mails, like this sign where I suggest all the teams, except the Black Team, eat free fudge. 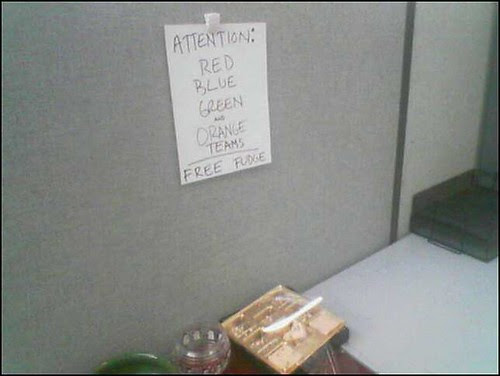 A few days ago at work, I noticed an empty box sitting on a cabinet in the main hallway in the same place where the free fudge had been. I’m sure just moments before the empty box was filled with sweet goodies, but the team had swooped in and finished off what ever deliciousness the box held. Now it was just an empty box. So I went to my desk and fashioned a sign for the Black Team with an arrow pointing down. The sign said:

I posted it above the empty box and thought that it was a good joke for the Black Team.

I didn’t realize that the sign said “FOR BLACK TEAM MEMBERS” or how 99% of our employees would read it as “FOR BLACKS ONLY.”

Fortunately, a VP took the sign down about five minutes after I put it up. She knew it was probably my doing and mentioned it to me a few days later.

This one's for you: