Can you believe this product?

Miss Shelly saw this in a magazine, thought of me and cut it out. Thanks… 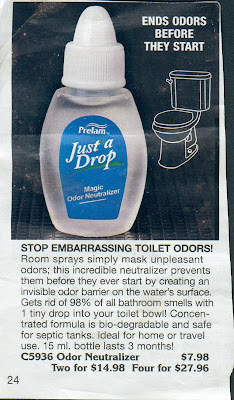 A drop of this miracle liquid in the toilet bowl is reported supposed to cover up 98% of bathroom stank.

First off, I have never tried the product and won’t, so I cannot give you an honest opinion (the shit might just work.) If you want a review, Chris Rockwell over at www.poopreport.com did an in depth study of the product. He has a theory about floating poop.

Second, how do you come up with a percentage of bathroom stink and then rate it on a scale? Here’s what I think… what they did was load up the fattest guy in the manufacturing plant with cabbage and white castles, had him drink draught beer for a day, killed him in the bathroom, let him sit for a week and then let his bowels loose with a whaling harpoon. Three independent judges in the bathroom would consider that smell 100% stink and judged other stanks based on the memory of that smell.

A few years ago, we had some clients in from California for a meeting in our one bathroomed, studio. One of the guys was not doing so well and hot sweat poured off his brow as his guts gurgled and churned. He called for a break and staggered off to the bathroom. The bathroom door only acted as an amplifier and the studio shook and reverberated as his bowels unclenched. The reek was horrific and every non-essential team member left for lunch at 10:00am. Holly did her best to cover the smell by lighting a coffee scented candle that had sat on her desk for the past two years. It had a layer of dust on it three inches deep that was stuffed in the protective plastic coating. She lit it anyways. The perfect storm of shit smell, burning dust, melting plastic and fake coffee came together and drifted up to the front of the office. Somehow the mingled, gas chamber combination made it to the meeting room and it smelled like burning wood. Actually, a pleasant smell. In some circles, it is still considered a miracle.

So unless this product can combine the essence of dust carbon, melting plastic and faux coffee… I ain’t buying it.

The Japanese had similar products for about five years. My mother took one home after her trip their back in '05. I don't know about 98% or whatnot but it pretty much makes the bathroom experience a lot more pleasant.