Until today, I had not taken the opportunity to eat at Five Guys Burger or Graffiti Burger. We were debating which one we should go to. So as a good friend of mine once said, "When given two options, take the third." So we got both. 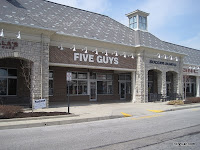 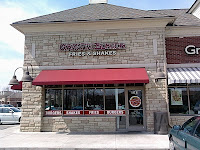 Keegan went to Graffiti Burger and I went to Five Guys. We decided to get a cheeseburger with ketchup, mayo, mustard, lettuce and tomato plus a regular sized fry. We parted ways and met back up after my flight from western Dublin got back in. 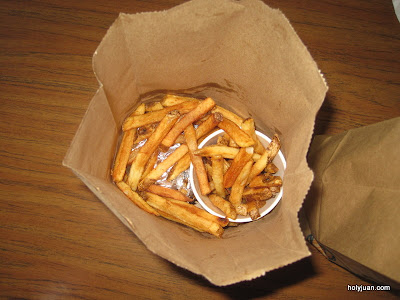 Looking in the top of the Five Guys bag, you see a bunch of fries scattered. This is done on purpose at the store. When your order is complete, they put the wrapped burger in, a cup of fries and they dump a small container of fries in on top of everything. 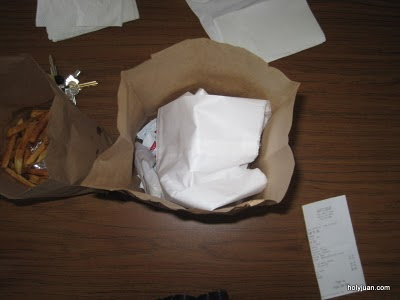 The Graffiti fries are contained in another bag. Here's what they looked like: 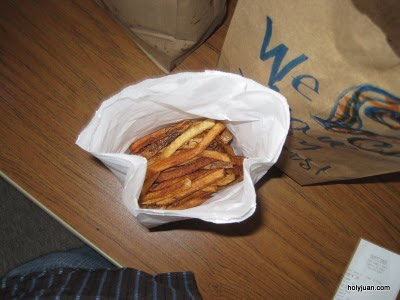 So we unbagged the bags to see the contents. First Five guys: 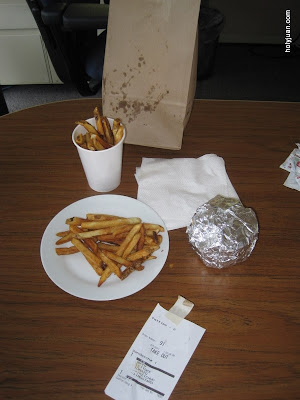 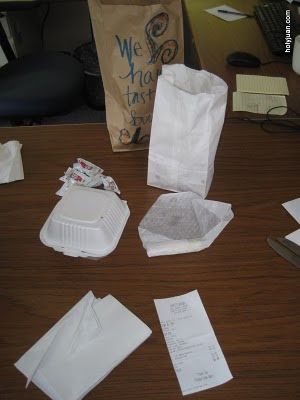 One thing that I heard about Five Guys was that they were expensive.  They were not cheap, but Graffiti and Five Guys were about the same price, both around $8.50 for the burger and fries. 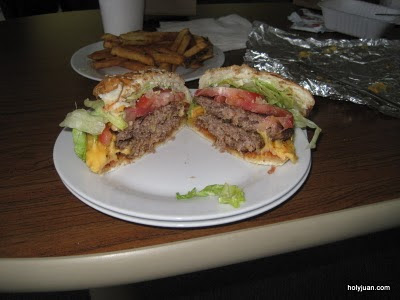 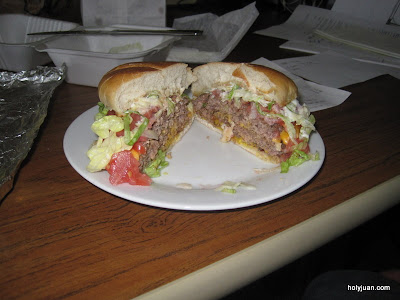 Both burgers weighed exactly the same at around 12 ounces. (I think... I have to double check this number with Kigeeane tomorrow.)

Here are your heroes: 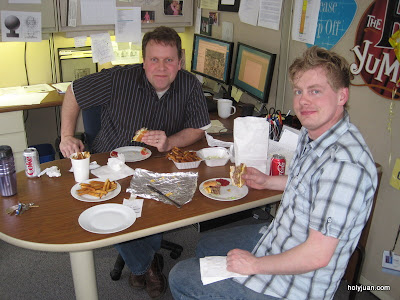 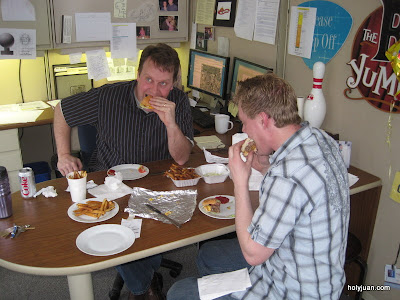 RESULTS!
Five Guys won hands down. It all came down to the meat. Five Guys was more savory. There was definitely meatier, richer taste with Five Guys. Keieganne agreed.

But wait... what about those fries? Graffiti took honors in the fry department. They cooked their fries a bit longer and their taste edged out Five Guys. But not enough for me to stop at two places to get my lunch.

Five Guys wins. I have to admit that I went in thinking that Five Guys was going to be overpriced and under quality, but I was wrong.

what about atmosphere??
the graffiti burger in grandview is all painted by giovanni and has cows sucking them selves off!!

My problem with Five Guys is that while it tasted delicious when I went there, about 20 minutes later I felt like absolute crap from all the grease. Food coma x 12. It is a great place to go though if you like peanuts :-)

Granted the same problem might happen with Graffiti Burger - but I've never tried it (or even heard about it actually).

Just goes to show that you can't judge a book by its cover, or in this case, a burger by its wrapper. I guess when you offer such a quality product, there's no need to dress it up with flashy packaging. Here's the parallel that I can draw on personally - when you have an enormous penis, you don't need a fancy watch or car to feel adequate, as evidenced by my Phillipe Patek and BMW 740iL.

Even the picture of the Graffiti burger looks unappetizing; the hamburger patty is so grey that they should consider adding Grecian Formula to the mayo. My compliments to Keiuigen for choking that thing down, but maybe Cieeigan is used to choking down old grey meat.

At the Five Guys down here in Louisville you can get a bacon-wrapped hotdog with cheese sauce.
Check at your local Five Guys, you won't be sorry.

seriously....you need to get another hobby...

five guys is better than graffiti hands down...but they have no cheese choices!!! It's american....american....or american...

Am very glad Five Guys won, as it's my favorite. Besides, I live in Northeast Ohio and we don't have Graffiti. At least, that I know of. The wife and I first had Five Guys in Oak Park, Chicago and I raved for months till they showed up here.
By the way, HolyJuan, even though she's never taught pre-school, my wife has been "Miss Jill" for 25 years. It just fits her.

We love us some Five Guys over here.