Good Times at the Jury Room

We went to The Jury Room the other night. It's an old bar that has been refurbished to look like it is still old. 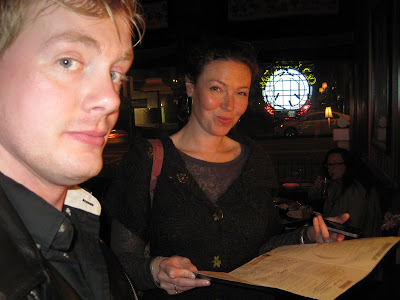 We got a table and Meghan showed up. Michael came later but he is not in this story except for this mention.

Keegan had suggested a beer out of Lancaster from Rockmill Brewery that he liked called Dubbel. I'm no beer expert, but dubbel is a Belgian Trappist beer naming convention. The origin of the dubbel was a beer brewed in the Trappist Abbey of Westmalle in 1856. Westmalle Dubbel was imitated by other breweries, leading to the emergence of a style. Dubbels are now understood to be a fairly strong (6%-8% ABV) brown ale, with under- stated bitterness, fairly heavy body, and a pronounced fruitiness. This beer comes in 750ml bottles (that's three gallons for those of you that don't speak French)and are meant for sharing.

Earlier on in the evening, I said I would chip in for the Dubbel, but after drinking a few PBRs, I knew that my palate had become as sensitive as a pallet and I wouldn't enjoy a good beer. Or maybe I'm just cheap. Keegan called me one of several names and our waitress said she would bring three glasses and a shot glass so that I could at least try the dubbel. 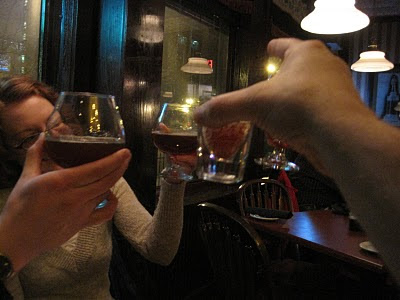 I ordered artichoke and other stuff spaghetti. It was really delicious.

At the end of the meal our waitress brought our checks. She split the dubbel between all those that drank, including me. 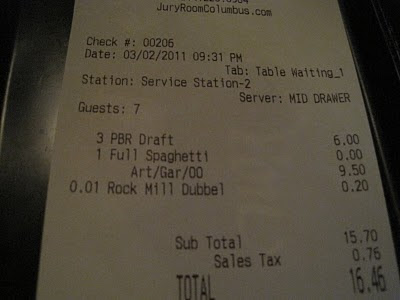 She charged me for 1% of the bottle! 33% each for Jenn, Meghan and Keegan and .20 for me. Oh, how we laughed. I wish I could remember her name. She was awesome. I know that Jenn will remember and I'll post it later. It's Laura! Crafty Laura! Thanks, Laura! 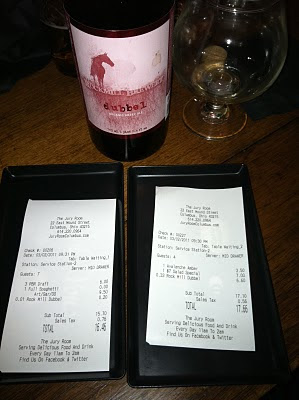 Check out the Jury Room and the Rockmill selection of beers as soon as you get the chance!

I do remember...her name was Laura! Crafty Laura!

I can't believe you chose PBR over a good beer.

Conny, no one has ever accused me of having good taste.