Jen and Robert's wedding was great yesterday. It was wonderful catching up with old friends.

Many drinks were consumed and after we were "asked" to leave the reception, the seven of us walked over to The Tip Top. Some of us ordered drinks. Some of us drank water. One of the water drinkers, who we will call "Mr. G", grew quiet. Then, he quietly walked off behind a planter and reduced the load of wine and cookies in his belly.

Mr. G returned to the table as if nothing had happened.

A few minutes later, Mr. G wandered off again to the delight of everyone on that patio. We couldn't see Mr. G as he had wandered off down the street a good ways, but we knew when he was puking because the crowd down at the other end would release a "whoa!" every time he puked. They said "whoa!" about five times.

Mr. G returned and was very proud that he didn't get his tie dirty.

Ten minutes later, one of the people on the patio that had been yelling "whoa!" showed up at our table with a present for Mr. G. 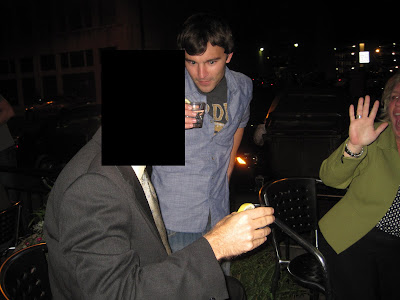 It was a shot with a lemon on the side. I assumed it was tequila.

Holy shit we laughed. Mr. G took the shot from the dude and was very polite at trying to turn it down. The guy was insistent that Mr. G try the shot. For a split second, we thought he was about to take it. Then he set it down on the table and didn't touch it again.

A few scientific tests later we discovered it was just water with a lemon.

Whoever you are, Shot Guy, thank you for the laugh.

And thank you Mr. G for being a good sport.

Heard Mr. G's version of the story. Kind of sorry we missed the extra fun, but I was busy doing other things. :)

We saw you two running down the street and towards the hotel.

You still had your dress on at the time.

Oh shit, your dad reads this.

Mr. G. thanks you all for loving and accepting him. Poor bastard just can't hold his alcohol. What a great party, and I'm tipping extra next time I'm at Tip Top. And probably Due Amici, too. I don't think I besmirched any other business's planters.

Great story.
A friend's thing about puking is her uncanny ability to get not a drop/morsel on her butt-length hair. Just thought I would share...

Hey NanU, you should check out this story and tell me if it is correct.