(CAUTION: This post is not safe for work, small children and most of the Middle East.)

Kim and Shorty held their mostly annual Christmas party this year and John decided to liven up the event via a shower curtain he purchased on the internet.

He originally meant to buy the (you don't want to click on this link)FISTING SHOWER CURTAIN, but it was probably so wildly popular that it was sold out and he instead got the SMDB curtain.

John was giddy when he and Bekah arrived at the party. They sneaked up to the guest bathroom and were relieved when the guest bathroom shower curtain hooks would work with their gift. They hung it up and the upstairs was immediatley filled with a stinky, chemical vinyl smell. Or it was a scratch and sniff curtain.

Here is the curtain installed: 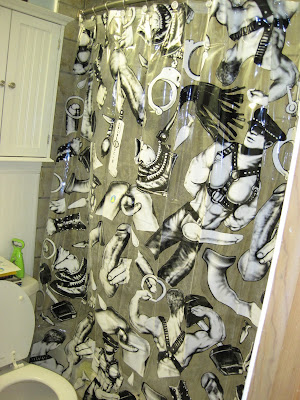 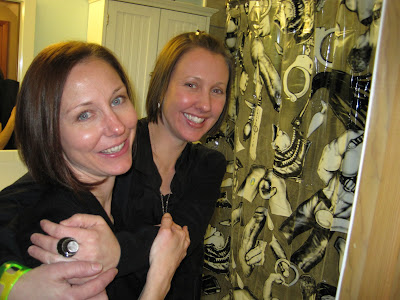 I never noticed it before, but the black shirts make it look like Miss Sally and Lynne are groping each other!
It took about two hours for Kim and Shorty to figure out the curtain was up. I assume they kept it up for a few months becuase they enjoyed it so much.