We had a Tweet-up in downtown Columbus at COSI a few weeks ago. A Tweet-up is basically a social gathering of networking internet folk who use Twitter. It was fun to meet people in real life and I got to crack wise and make an ass out of myself.

As the night was wrapping up, I had the opportunity to chat with Erie who works in the Ohio Attorney General's office. She was very cool and I wanted to make sure that I had her name so that I could follow her on Twitter. I had my camera and went to take a photo of her nametag. I realized that I was about to get a picture of her womanly front part protrusion and, giving into modesty, visually blocked her female, chest area protuberance with my hand. 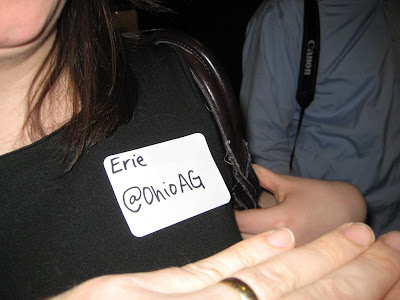 I didn't think anything of it at the time, but now that I look at the photo, I must assume that she thinks I am a complete idiot.

But you have got to give it to me that I didn't say boob once in this entire article.

zoom in or tilt your camera up, *sshat.

I was using a Minolta 233E with a fixed lens. I was at f 3.5 and with the minimal light, my CO was less than 2 feet. I didn't really have the opportunity to zoom and my film speed was up around AX200, so I couldn't tilt.