Word(s) of the Day

I started a list at work a few months ago of poorly spelled words that our guys would send in on their reports and e-mails. One day at work, I was talking to a client and said the word “visceral” over the phone. Angie remarked that she was surprised I used the word or that I even knew the meaning of it.

So we started a list of the best word that was used in the office that day. What it has turned into is a diary of sorts where we can look at a word and remember what was happening on that wretched day when that certain word was uttered. 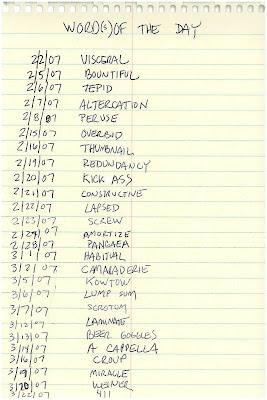 2/7/07’s altercation came from one of our guys interacting with a store manager in a most unprofessional manner.

The 2/8/07 word made both lists. The guy was trying to say pursue as in “pursue a lawsuit” and said peruse instead. A misspelling and a word(s) of the day… bonus!

On 2/20/07 Angie said “kick ass” when I was taking a client to task on their project management abilities. That also caused the list to be renamed from “Word of the day” to “Word(s) of the day.”

Hopefully on the next sheet we’ll see words like “raise,” “bonus,” or “in the black.”

Email ThisBlogThis!Share to TwitterShare to FacebookShare to Pinterest
Labels: Word of the day, Words of the Day