Margot and the Nuclear So and So’s at Ohio University

{Editor’s Note: This really isn’t a review except to say that Margot and the Nuclear So and So’s is a group worth listening to. The views expressed by HolyJuan are ramblings and incorrect assumptions about people whose full names I had to look up on the internet. I am not a reviewer. I am just a consumer.}

Margot and the Nuclear So and So’s played the Baker Theater on Ohio University’s campus in Athens, Ohio in the Spring of Richard Edward’s 23rd year.

They sounded great. Richard Edwards was a prick. And I loved it. 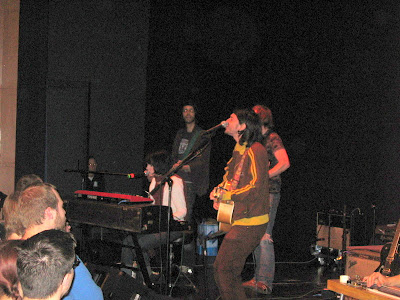 Lead singer Edwards is dark and funny, kinda like a dyslectic cat’s third suicide note. At the outset of the concert he non-verbally dismissed the crowd and seemingly sang to himself for the first few songs. I don't blame him, the crowd seemed tentative. But, the lackluster crowd fed upon his annoyance and lack of interest and by the fifth song, everyone had come around and the show really started to kick.

Margot played the team favorites from The Dust of Retreat album and a few songs that I didn’t know and must assume are from the new album or from some other shadowy place in Edward’s past.

I tell you, I like this fucker. He’s dark. He digs the Tennenbaums. At one point in the show, he began to diatribe about the new album and that Margot’s music is what it is rather than the bullshit, chamber pop they’ve been painted into a corner with. The group is compared, by some, to Arcade Fire which drew the ire of Edwards. The best line of the night was, “our next album is going to make Arcade Fire look like a bunch of pussies." Brilliant. 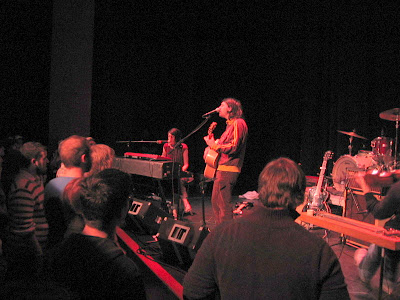 They encored four songs and I loved every one. Kudos to Erik Kang on the violin and the stringed, country music instrument that sits in your lap and makes you want to drink whisky out of a jug. Emily Watkins is always an audience pleaser on the keyboards and the three dudes at the front of the stage had no fucking chance with her. Her Playskool recorder didn’t seem to work though. Really. Fortunately, I was at the far end of the stage and didn’t get to see Casey Tennis dance around like a loon. He came in for the very last encore song and somehow silently played the tambourine. I give the guy shit, but he’s got character and sometimes that’s all you need. Everyone else in the band sounded great and I'm sorry I don't your names. I'm not good with names.

Check out Margot in several places:

Support this band, assholes. They’ve got a new album coming out soon. If you hurry, you can buy Dust of Retreat and finally claim you knew a band before they hit it big.

Email ThisBlogThis!Share to TwitterShare to FacebookShare to Pinterest
Labels: Margot and the Nuclear So and So’s, Ohio University