I asked our household psychic to help us find the murderer of JonBenet. He drew the following sketch to assist the Boulder police in locating the murderer. 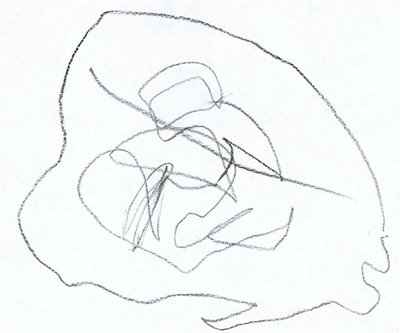 Clearly you can see the drawing of a one finned porpoise. Inside that animal is a street level map of Leadville, CO. There are also two hieroglyphics representing toilet and forge.

The porpoise is winking.

Our analyses of the drawing are probably the exact same ones that you have derived from the sketch:

1. Porpoises are fish that breathe air
2. Leadville, CO once had the 12th largest Jewish community in Colorado
3. The two symbols together can be roughly translated to John-Smith.
4. Porpoises do not have maps on their insides, but have been known to swallow fish sized globes.
5. Do not trust winking porpoises

Here is what can be surmised from the drawing:

The father did it.

The psychic may also have been influenced by me asking him to draw a picture of mommy with baby in her belly. This is still being investigated.

His mommy is a porpoise?

That's not very nice. You know how pregnant women are aware of their body size.

And to answer your question. No, his mommy is not a porpoise. But the father is Seal.

His father is a manatee...

Your sister is a better kisser.

Say whaaaat?! You're really ballsy for a manatee!