Um, can I keep my tray table down the entire flight?

The news reported this morning that a plan to bomb several planes between the UK and the US was uncovered and (hopefully) thwarted. The security lines at Heathrow were between 3 – 4 hours long because passengers were unable to bring any liquids through security and carry-on baggage was heavily restricted. Damn that sucks.

It’s been discussed that perhaps all passengers should be required to fly nude. This works for two reasons:

One: unless you cram the bomb up your ass, it would be very hard to smuggle on board.
Two: religious fanatics are not allowed by their god to see naked bodies and therefore will not fly
Three: (I just thought of a third) It has been scientifically proven that suicide bombers have small penises. While covering their shame with their hands, it will impossible for them to commit acts of terror.

I’m all for it. Except for the issue I might have (as illustrated below.) 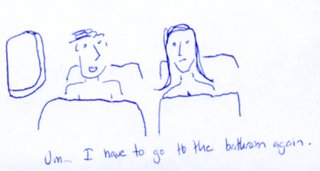