I got caught up writing about something else and now I don’t like where it went. So instead of reading five pages of drivel, please take a look at the following photo: 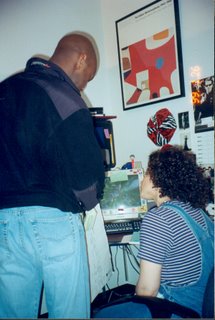 I believe this was an attempt by my previous employer to meet and exceed the quota for affirmative action. The guy you see in this photo was:

black
gay
bald
and he stuttered

It doesn’t count for affirmative action, but the guy was also not that smart. At least he made some very bad judgment calls. Lucky for us, the guy last strawed, was let go and we hired Lacey.

The other person in the photo is Anne. She is the cat's coffee. She is the corn on the tinternet. She puts the crazy in crazy crazy. And I'm realizing that I miss her.