A Rough Start *or* When Open 24 Hours Means Something Else

Thursday at 5:30pm, Kit called to say he was in the parking lot. I had just finished changing clothes and making sure that I was only forgetting two or three things. Greg arrived a few minutes later and we filled his already full trunk with our bags.

We were off to Chicago.

Traffic out of Columbus was for crap and construction had us slowed to a crawl. Slow enough so that a car next to us had the time and opportunity to make the necessary jestures to explain that we had a flat tire. We waved a thanks and pulled off.

We had the aspirations of a pit crew as we simultaneously leapt from the car to change the tire, but the ballet of clumbsiness that followed was laughable.

The fully packed trunk was evacuated of our bags and a soccer coach's collection of stuff. Greg was on the jack and Kit and I we responsible for extracting the spare tire from the bottom of the trunk.

But the spare tire had other plans. The plastic cap holding down the spare would not relent. Not to my girly grip nor Kit's steely grasp could unscrew that cap. Kit whipped out his trusty Leatherman and he applied leverage. Leverage did its job and broke off half of the plastic cap. With only half the cap left, we used Greg's wide array of truck tools to ensure we would break off the other half. With a rusty phillips screw driver and a piece of metal that looked like it once had a purpose in life, we applied a different kind of leverage that broke the other tab off.

With no intelligent choice left, we used brute force and over then next ten minutes we bloodied nuckles and bent tools. We realized that if we chipped away enough of the plastic, we could pull the tire up and off of the stuck cap. With 75% of it chipped away, we used the spare to pull up ad break that mother fucking thing off. 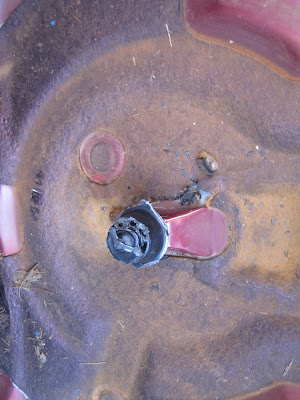 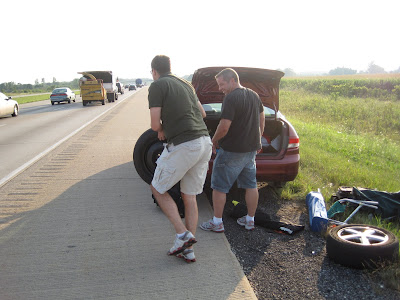 We loaded everything back in the truck and drove to the next exit. With the approval of the gods, that exit had a business called "24 Hour Tire Repair" right off the exit.

But Greg saw a Third Scenario.

We drove to the Pilot gas station across the street. Greg said, "When you are in the store, look for a tire plug kit." I thought he was joking because no manufacturer would create a product that regular idiots like me might use that could result in exploding tires and car accidents. So I didn't even look for a tie patching kit. I looked for Swedish Fish instead. Kit got the number for a different repair shop from the nice lady at the counter. I called and left a message for Bruce that we were in dire need of help. Kit and I watched Greg emerge from the gas station holding a tire plug kit. They actually sell them.

We moved the car to a lonely spot in the parking lot and empied the trunk again. Kit pulled out the flat and Greg redied the kit. We found the most likely spot where the hole might be. Greg used the shiv looking device to ream out the hole location. It was tearing the crap out of the tire and bits and chunks of rubber crumbled to the ground. I feared the worse. The next step involved threading a strip of rubber that looked like licorice through something that looked like a cross between a needle and a wine bottle opener. He applied a pungant adhesive from a tube to the licorice. 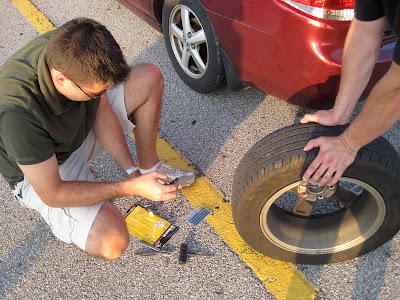 The whole lot was then shoved into the now gaping tire hole. 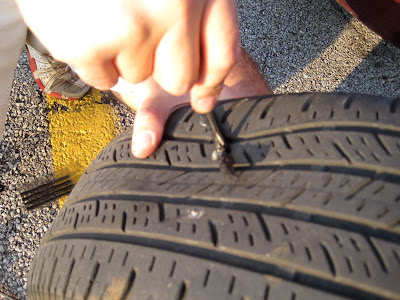 When Greg pulled the needle device from the hole, a sharpe edge cut the licorice strip in half, leaving it behind in the hole. A nub of patch and gooey adhesive stuck out of the tire. 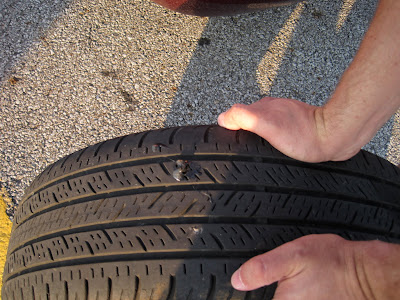 Kit rolled the tire to the air station and filled it. It held. While they were filling I jacked the car up. Greg and Kit applied the patched tire. 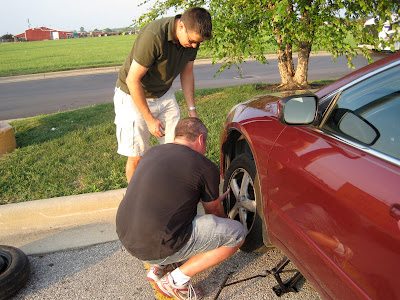 Ten seconds after this photo was taken, the car rocked back off of the jack and came slamming down. Luckily the tire was completely on and we all had time to back away to watch it fall off the jack at a distance. Safety Tip #103: Always put your parking brake on while changing a tire.

We loaded the trunk and piled in. Greg took a test drive down the road and back again. We stopped at the 24 hour tire repair parking lot (still closed) and checked out the tire. It was holding. We got back on the highway.

The tire held and we made it to Chicago with enough time to go to a party that we were not allowed to enter. But that's a story for another time.

Here's a photo of Kit taking his turn at the wheel, driving up 65 with a patched tire and three very excited boys on their way to Lollapalooza 2010. 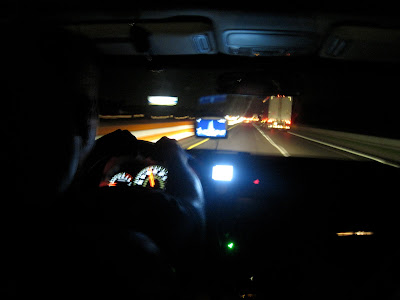 Hey, you lazy, hungover bastard! How about some new text on the trip?!
Bert

Dude, your blog is fucking hilarious. "Leverage did its job and broke off half of the plastic cap." I love it.