The official program of the 2010 Lollapalooza came with an iTunes card glued in the back. Upon inspection, it read that the card was good for 40 free songs. 40 FREE SONGS! And they were handing out the programs like candy! 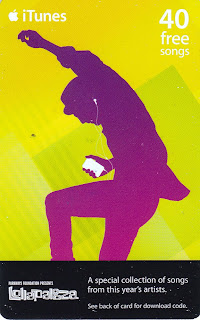 The process in my head, which I call math, started to ask for additional processing resources, so I stopped in my tracks and started to figure out how many of these cards I would need to break even on my ticket price.

Greg saw me come to a complete stop and noticed the tell tale signs that I was thinking. He knew what was going on in my head.

"The card is good for only 40 specific songs. You can't use it to buy anything else."

So I stuffed the card in my wallet for when I got home.

Later that day, we saw a dude going through a recycling bin, pulling out programs and looking for the iTunes card in the back. We didn't say anything to him, but I assume that he figured it out on his own once he got home.

On our last day of Lollapalooza, Kit and I were standing at the Blogger stage when three very good looking, blind girls approached us. We thought it odd that the blind girls didn't have guide dogs or walking sticks. It took us a moment to figure out that the three very good looking girls were actually NOT blind and were asking us where the Adidas Stage was. Kit said he thought it was at the other end of the park and pulled out his Program to confirm it. Their destination was at the other end of the park and I would have thought their next move would have been to run from us post-haste. But instead they began chatting with us. One of the girls pointed at Kit's program and said, "Did you know that there is a iTunes card in there that gives you 40 dollars worth of free songs?"

I, in my 40 year old know-it-all-voice, said, "The card is good for only 40 specific songs. You can't use it to buy anything else."

And with that, the imaginary, shimmering bubble that surround us burst and they said thanks and walked off.

I downloaded the 40 songs and it turned out there were 45. They should edited the graphic on the card to read, "4 songs you will like and a shitload of others that suck balls and make you wonder why you dug through the recycling for hours to collect these fucking things."