John is a Good Friend

My friend John is getting married this weekend. I can only hope that at sometime in your life you get to have a friend as fiercely loyal and genuine as John. John is my friend for several reasons. I will only include the ones that will ensure that his wedding actually happens and that my divorce proceedings won’t:

John wasn’t too upset when I literally stole a girl out of his lap at a party in his house
John has driven when I could not
John has paid when I didn’t have the cash
John held my clothes when I went streaking
John stood by sober when I was a drunk idiot at Outland on SEVERAL occasions
John drove to visit me in Boston and slept in trash on my floor
John has never said no
John has never brought up the fact that I never gave him $200 for the Amiga 2000 computer I “bought” from him.
John lights up a room
John never complains
John will lend you his last dollar and take out a loan if you need another
John loves my kids
John doesn’t mind (too much) when you fall through his roof
John always has a place for you to sleep if you need to crash
John will pick you up at 4:00am from anywhere
John will not hold a grudge
John spent 12 days in Paris with me and we are both still alive
John agreed to pick me up at the Columbus airport and then drove over to Dayton to get me when I fucked my flights up
John bought me doughnuts and it saved me from a bad case of the herpes
John remembers my stories when I do not
John laughs at my jokes
John wants the best for everyone
John is there when you need him and he knows when it’s time to leave
John is a good friend 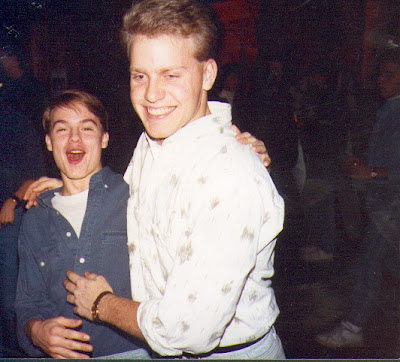 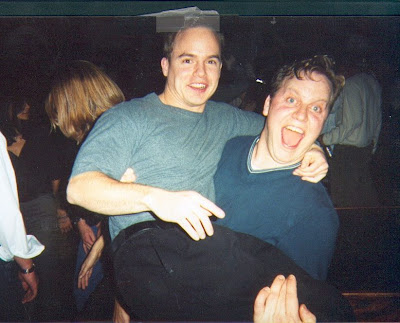 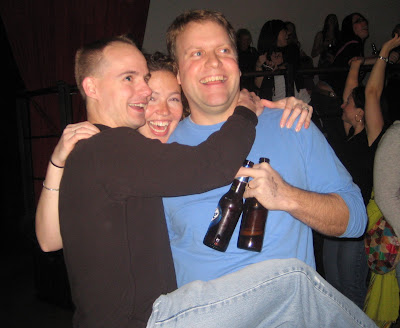 what a great tribute to john. it's so rare to find such a true friend. he's the type of person that i am sure everyone he comes across just always has the best things to say about him. i like that the first pic is one that i took. you guys together would make a hysterical morning show on the radio. seriously. miss you guys and best wishes to john this weekend!!

John sounds like a great friend---and I KNEW you looked familiar. I was another drunken fool at Outland :D