WESTERVILLE, OH - This election has not been working out as planned for John Laughlin of Westerville, Ohio. “I voted for Paul in the primaries. When that didn’t stick, we started a write-in campaign for Ron. My yard sign has been proudly displayed for thirty two weeks now and I haven’t had one theft yet. It’s a bit discouraging” 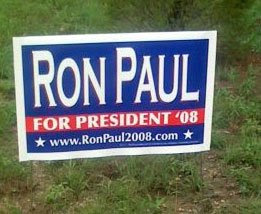 The sign is displayed prominently in Laughlin’s yard on a busy side street. He guided me through some of his defenses. “I spent $150 on motion detectors and $75 on extra cable for my webcam.” His plan to capture possible thieves in the act has gone unexecuted. “I’ve got the sign pulled up so that getting it out of the ground would not take much effort.”

While Obama and McCain supporters in the neighborhood point fingers at each other concerning a recent string of sign thefts, Mr. Laughlin shakes his head. “I thought I would be out here every day chasing off Freedom Naysayers. Instead, these other two clowns get all the sign theft press. Hell, even the Peterson's 'Elect Nader' sign got knocked over at least once."

Like any Ron Paul supporter, Mr. Laughlin is very positive, “There’s always 2012! I just have to edit the existing 2012 signs I had made up to get rid of the ‘Re-Elect’ to just read ‘Elect.’”

LOL--Campaign sign stealing was also a subject that came up at the reunion. Apparently Miss Jamey and some cohorts stole enough political yard signs so that when MBT woke up, her entire yard on Union St was covered--you could not see any grass, and we even had them sticking out of the bushes..It would appear that political yard signs were a better medium for me to work with in comparison to toilet paper..... :)

I ran your name and addresson Accurint. I am totally coming to get it! Could you conveinently turn off your equiptment around midnight on Friday?
R