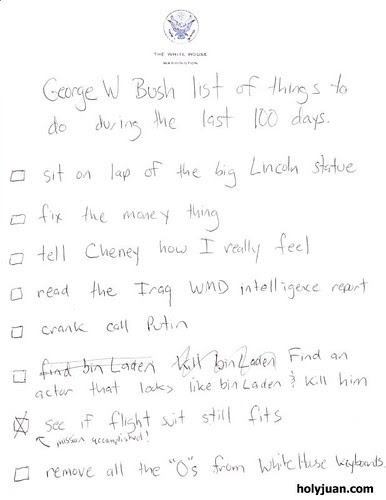 This post has to be the most foolish, false, openly biased partisan hackery I've ever seen and you should be ashamed for the very implications of this.

Everyone who's not an ultra far right nutjob like you knows it.

You stupid f*cking liberals. We have not had a single attack on US soil since 9-11. Thanks to that man. Not like the idiot before him. Bin laden has been dead dumb f*ck. Do you really think Bush would announce it with all you liberals thinking that all this war is about is bin laden. He is nothing, a symbol. There are far worse under him. You clown are whats wrong with this country.No sense.

Ladies and gentlemen, another well thought out and poignant comment from a McCain/Palin supporter.

Typical americans, either eloquent and sarcastic or just the opposite, but always capable of placing their "freedom" to have cheap gas and resources above other nations' human rights. Thank god fukuyama was wrong and the "american" century is not to be. You will eventually find your country humbled to a level similar to that of the majority of your citizens - credit maxed out and warfare a convenient source of income. I feel religion and lack of travel are to blame. If you would actually bother to stick your nose outside of the yard, you'd probably knock it of with the "we're no. 1!" and demand socialist measures for yourselves, not just the bankers. - a guy from EU

Listen here crabcakes… why don’t you stay over on your side of the pond and let us take care of our own business. I make fun of our president because I choose to, but don’t you come over here and poke a stick at our chimp in charge. Make fun of your own countries that can’t seem to stand up for themselves, so you all have to get in one big refugee raft you call a Union and hope to God Russia doesn’t start dropping bombs on your ass.

We’ll take care of ourselves asshole. And keep your nose clean or we’ll make up some WMDs to find in your backyard.

God save the Queen.

And we are number one... don't you forget it.

Now that is Monty Python material! Or maybe the "the most hopelessly enslaved are those who wrongly believe they are free" kind of illustration? If it were possible I'd actually invite one of you over to see your wide eyed amazement about all the perks truly civilised world really offers (yes, we get healthcare, education, service in restaurants and many more things for free, because general wealth distribution is a bit more equitable, and we get to drive our incomparably better cars legally at speeds of over 200 mph and smoke pot [and more importantly drink beer] in the street...). Did I mention we get so much free time and vacation we can actually have hobbies more involving than TV and beer and we can go somewhere overseas as civilians before retirement and after college? (that is why you can't come, right, either no money or no time?) Touché!

Yes. Exactly. Which is why all of your foreign types clamor to come over the the United States to live, go to school and thrive.

Stay where you are. Don't come and enjoy our overweight women and varied beers.

For someone who doesn't give a shit about America, you seem to obsess about us lot. Douché.

200mph? And I thought American's math skills were bad.

Everybody loves to go to a zoo or a botanical garden, right? I claim it is not because they want to join the animals in their cages. What we do when we visit you is take what little contributions you have to offer to the civilised world (I cannot think of any right now, maybe legal right turns on red lights) and hurry back home where civilisation actually exists. Those who want to stay are from third-world countries such as mexico, just looking for somewhere a bit better then mexico city or some similar hellhole and USA comes in handy because it's close at hand. And, just to make it clear, 200 mph is not an error and your math skills are among the worst in the world (stats do not lie) I've just converted 320 km/h into mph. But I imagine the big no.1! finger makes you feel better without having to copulate with relatives or starting another war, so by all means, wave it as hard as you can!

Glen Beck say you liberuls are no smart becaus you are socialistic and want lesbian negroids to com take are guns but God don't want. Ha ha ha and leave Merka if you no think it good you liberuls.