A few weeks ago I went to the CD release party for The Hot Damn… (My five year old son thinks the name of The Hot Damn is actually the Electric Pickle because I couldn’t rightly say I was going to see a band with the word damn in it and when I asked him to guess the name of the band, he suggested Electric Pickle, a band he heard on Scooby Doo, so it stuck.)

A few weeks ago I went to the CD release party for The Electric Pickle, which was held at a little venue called The House of Crave. The House of Crave is strategically located next to the Lifestyles Communities Pavilion, which you might think would be a swingers club, but is actually an indoor/outdoor concert arena. That night, Rick Ross was doing a show at the LC and in front of the concert hall was “Yo! photo.”

“Yo! Photo” is some guy with a bed sheet, some paint, a 1” brush, a section of a chain link fence, a few clamps, a white board, a digital camera, a color printer, a crocheted lawn chair and a dream. 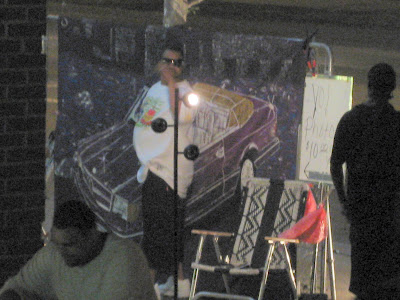 The dream became a reality when Yo (I think that is his name) painted a royal purple convertible on a bed sheet and thought to himself, “I bet you people would pay $10 to get their photo taken in front of this.”

From my vantage point on the patio of The House of Crave, I could not see that dream coming to fruition. I just couldn’t see people wanting to give up $10 to have their photo taken in front of a large, purple slice of ass. 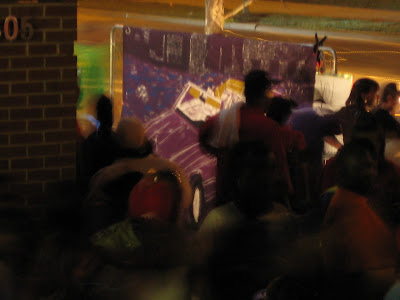 The Rick Ross show ended and people started to pour out the doors.

And they headed straight for Yo! Photo.

In about thirty minutes, we saw eight groups of people stand in front of the purple turd and smile as Yo took their photo. My rough math says that is about $80, but it also looked like he was printing up multiple photos. The price of additional photos wasn’t on the white board, but I assume it was $5 a print. The guy probably pulled down $150 just in that half hour.

As soon as I can find a length of chain link fence and a bedsheet, I’m going to have a dream too.

Email ThisBlogThis!Share to TwitterShare to FacebookShare to Pinterest
Labels: Lifestyles Communities pavilion, Rick Ross, The House of Crave, Yo photo