I ran over a baby rabbit with the lawn mower this afternoon. We noticed a nest a few weeks back and the kids have been very curious about when the bunnies will start running around the back yard. The answer to that is: today.

I was mowing the area outside the fenced-in back yard and didn’t think that any of the little furry bastards had made it that far. One did and he was really hidden because I did not notice him till he popped out from behind the push mower, upside down and franticly kicking.

I yelled. Really loud. Miss Sally came out of the house thinking I had cut off my foot.

I'd seen a nest of rabbit run over with a riding mower when I was a kid. Most had died instantly. A few with cuts all over with no chance of survival. Eyes bugging out. Blood.

This rabbit had righted himself and was sitting, balled up and very still. I picked him up by the scruff and there was blood on his fur in back. I couldn’t tell if the blood was on his leg or if the blood was on where his leg used to be. I carried him into the fenced in back yard and put him by the nest so that he could be close to home when he died.

Because I am a big softy, I became distraught. I started to reflect upon life and that it’s been a year since I gave a futile dose of CPR to my dying/dead neighbor. He had been mowing his lawn that day. I thought about how life can end in the split second it takes for a mower blade to spin around or in the agonizing ten minutes it takes to die, waiting for someone to give you CPR.

And then I checked my mower manual and found the problem. 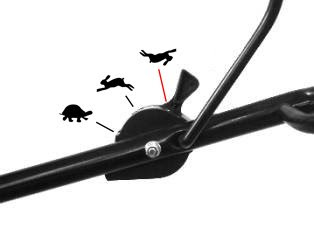 I had the throttle on the wrong setting! I changed the lever off the dead rabbit position and continued to mow the lawn.

A few minutes ago I checked the nest and the rabbit was gone. I looked over the yard and over by the swing set, the mama rabbit stared at me. In a flash she darted off… and left behind was the injured rabbit. He hopped a few times and hid in the shade.

I left the yard and went inside. From the kitchen window I could see them back at the nest. Mama keeping watch and Limpy following behind. I hope I see him hopping tomorrow.

you bastard, you killed kenny. j/k. I almost ran over a cat once, that would have been messy...

This reminds me an awful lot of one of my posts (except my weapon of destruction was a dog and not a lawnmower).
http://nagonthelake.blogspot.com/2008/05/some-dogs-are-heroes-others-are-not.html

have you seen Limpy lately? =(