Delta Airlines thinks you are a little girl

I flew Delta Airlines recently and was displeased to find that the Puke Bags are not made out of paper anymore. It used to be that you could write someone a note/letter on the bag and they would find it mildly amusing. Now the bags are made from a Space Age polymer that seals the puke and puke odor inside and rejects most forms of ink. There is even a convenient peel/sticky at the top that is good for sealing the bag or for tearing off and wrapping around split cigarettes to make them smokable. (Do not smoke the peel/stick part!) 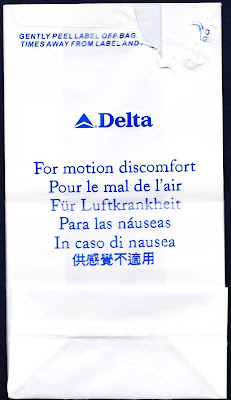 I was also a bit put off that Delta thinks that, as an American, you are going to get upset or distressed if they call it a Puke Bag. Or Vomit Bag. Or even just an Air Sickness Bag. They call it a Motion Discomfort Bag.

But Delta realizes that people from other countries aren't offended easily and would probably be confused if they tried to make the bag into something more pleasant than what it is. Here's the translations for the other countries: 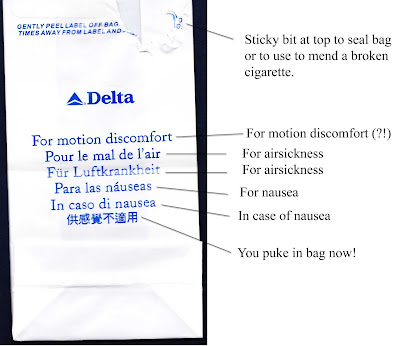 The bag has two sides and those clever Marketing folks over at Delta thought you could use the bag to save your seat so they printed Occupied on the bag. 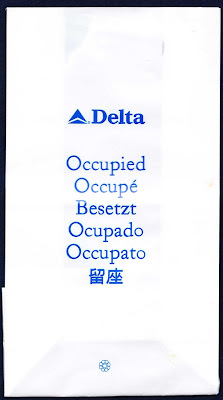 Me? I kill two birds with one stone and puke in my seat. That way nobody is going to take my seat and I don't have to own up to being a little girl.

That does not say, "you puke in bag now"

Yes I know. It actually translates to, "In Bag, you puke now."

Sorry for the slip up!

Sharpies wouldn't work on this?