A recent article from MSNBC has China’s Bo Xilai, commerce minister, quoted as saying that "over 99 per cent of China's export products are good and safe".

Unless you look at it as 1% of their exports are unsafe.

I’m in the process now of sending my kid’s Thomas the Train cars back to the manufacturer. 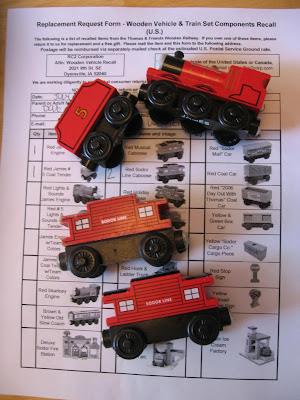 Note the chew marks on the caboose.

When I worked at a retail installation company, we dealt with a lot of imports from China. It seemed like the quality was decent, but there were always little problems such as poor welds or holes that weren’t drilled out completely. I, like anyone else with 4th grade math skills, understand the business mentality of savings. A big retailer was planning a rollout of 1,000+ stores. Slightly better quality wire shelving in the States was only $12.50 higher per unit. There were sixty units to be installed per store so by going with China, they saved $750,000. Which route would you go? Now, if you find yourself buried under a poorly fabricated shelving unit, you might think differently. All I had to do was listen to the installers bitching all day about “Chinese crap.”

I think what Bo Xilai should have said was that 100% of all exports are safe and then back it up by saying that in China they round up to the closest 100.

I'm sending back a small box of trains too.

Did NBC renew your show? I thought it was okay. I really think you should've stuck it out as Conan's sidekick. You two were great together. Good luck with this blog thing.