Miss Sally gave Greg his bath last night as I finished painting the living room. (It was an awful red that only looked good in photos.) Usually I give Greg his bath and afterwards we watch 15 minutes of cartoons as he dries off. We then revert back to the normal bedtime routine. The good thing about “routines” is that they create expectations and get a child to sleep with limited wrangling. The bad thing about routines is if you stray from them, the schedully unrestrained child will most likely tumble out of control.

Miss Sally was not aware of Greg’s bath night routine of cartoon watching and she ended up wrangling him for an additional thirty minutes after the twenty minutes of arguing and figuring out where the train left the track.

Later on in the kitchen, Sally suggested that we need to get Greg on a standardized routine or share with each other what the routines are. I agreed. She also then mentioned that it would be nice if we could get out of the house and go on a date. I thought these were both great suggestions and I realized that we just had a conversation that was suitable for Dr. Phil. Wow. Communication. Sharing. What a great marriage!!

The next morning, still glowing from our conversation the night before, I gave Ann her bottle and was making ACTUAL PANCAKES ON THE STOVE . It was during this time that I flipped aimlessly through Real Simple Family magazine that had been sitting on the counter. My eyes glanced over an article about “Sticky Situations” with bottle of glue icons to rate the level of stickiness.

That’s when I saw this one: 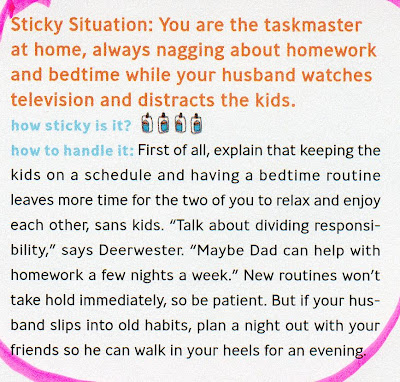 Coincidence? I think NOT! I'd been magazined. My wife had read something in a magazine and tried to covertly implement it into our life.

I circled it with pink highlighter and left it open on the counter. Miss Sally came down a few minutes later and I said, “Look what we have here…” and pointed to the magazine.

She read the quip and shrugged slightly. I accused, “This is almost word for word what you said last night. And this article suggests I lie on the couch all the time.”

She denied it. Yes, she had read that article, but in no way shape or form was she attempting to article verbatim our relationship. And she was not accusing me of laziness as I am always putting Greg to bed. The routine suggestion was just that and the date night comment was just that as well.

Still… I’m sure it was possibly a subconscious train of thought to go from Greg’s routine to date night. Miss Sally would never magazine me.

I wish the article would have been from Cosmopolitan magazine and been titled “Ten Sex Cravings All Guys Have” with boobs for rating icons. Maybe I should get the highlighter out.

Women lie a lot more than men, and are slower to admit the truth when called on their lies.

You were magazined, and what's worse she probably sees nothing wrong wtih what she did.

It was deceitful, and underhanded, and I guarantee it's not the first time she's manipulated surreptitiously either.

Dude... I'm guessing you were drunk when you wrote this which is why your wife left you in the first place.

Your only hope of getting a woman is to PRAY TO GOD that they do lie because that's what they are going to have to do to themselves to stand your depressed ass.

Don;t tell me that my wife lied. That's for me to find out. She said she didn;t and I trust her fully.

You have a stain on your shirt.

You'd think those mail order wives from Russia would come with a basic understanding of English comprehension.

Magazined. What a great word. You are number one in Google for it because of this post. magazined - Google Search

I'm gonna ask my wife if she has ever magazined me. :)

Fortunately on the internet, grammar is what you make it.

In this article alone I made up the word "magazined", "schedully" and turned verbatim into a verb or something verb like (again, my grammar sucks.)

With the evidence at hand, you could have at least pushed for something better than a "date night".

What would you have me do? Give her poetry when I e-mail in my timesheets?

Love the blog, my friend.

Magazined! I hate it when that happens! Sorry, I had to giggle when you found that out.

I have never done that to anyone, but the thought was always there. Sometimes, being 'magazined' is all you need. :)

Anonymous is a crabby one isn't he??!

There is a color called Cabin red. It is at Lowes . and it is the perfect red for a room I know because I have a "red room" for my office . I will show you pics if you want.
Anonymous (the real one)

I would say not at all Michelle. I would say rather that you're low on morals, or probably that your gauge for immoral behavior is broken. If you see no problem with her behavior I feel sorry for the men in your life, because it's likely you do the same or worse to them.

What "she" did is deceitful manipulative behavior. It's as dishonest as it is immoral.

The sad fact is women lie more than men, and they lie about bigger things than men do, and they do immoral things like the manipulative behavior written about here.

Those are the same women most likely to trash men