Roll out the Knitter

As with many of my writings, I try to protect the innocent with nicknames and plumes of nomness. It’s not their fault that I remember and record. Why should they suffer the burden of my writings and their friends’ internet searches on Google? With this tale I must reveal the name of the main character as it is an integral part of the story. This story involves my friend Knitter. (Pronounced like you would pronounce someone who knits stuff. A Knitter.) Here is a photo of him kissing a 40oz of Magnum at Chris and Karen’s wedding. 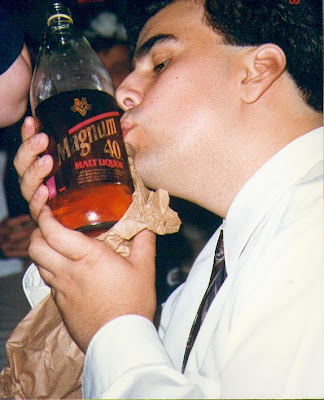 No, the story is not about how we snuck 32 bottles of different varieties of malt liquor into Chris and Karen’s wedding (to their dismay,) though it does involve another wedding and the consumption of malt liquors.

Let’s go back about X years to Ohio University and a crisp Spring Quarter Saturday night. Earlier that evening, we had a two 40oz party. The night would start with a trip to the Quik-e-mart and the purchase of two 40oz bottles of malt liquor. There was a time in my life where I could list off 12 – 18 varieties of malt liquor. Oh a whim, let’s see what I can pull out of my ass right now:

Crap. That’s it. Well, I am from Lancaster and not Lorain.

(*Cool Colt was Colt 45 with spearmint flavoring added. I totally forgot about it until recently at a keg party when I didn’t have a cup and used an empty Rumple Minze bottle to drink from. Nothing like a drunk asshole with fresh breath.)

Back at the Quik-e-mart, you would pony up $3.87 of change and leave with two, mostly cold bottles of, hopefully not skunked, malt liquor. At 23 Palmer Street, we’d sit in the living room and drink down our two bottles of skunked malt liquor and watch public access television. Normally, you could drink one 40ozer and kick in a solid buzz that would last for a few hours and save you $10 up at the bars. Two 40ozers and you would stagger Uptown and try to hold down your cookies after eating $10 worth of beans and meat at the Burrito Buggy.

This night, Knitter continued to drink once we walked uptown and got himself good and solid hammered. And as we walked uphill/downhill home (we are talking about Athens, Ohio) Knitter decided to trip and fall down on the top of a hill. As he lay prone on the brick street, I realized that it would only take a little effort to get him rolling down the hill. I gave him a generous shove with both hands and he began to roll. Any normal person would have airplaned their arms out and stopped the momentum. Knitter tucked his arms in to minimize friction and continued to roll. As we chased/stumbled after Knitter, a song erupted from my mouth that went a little like this:

Everyone joined in on the song, (at least the first verse,) and we took turns rolling him down Mill Street. We got Knitter to the bottom of the hill and he shot upright and was able to walk a straight line back to Palmer Street. I think he slept for 38 hours after that.

Fast forward X – 3 years. We are all at a good friend’s wedding reception on Lake Erie. In a show of respect to the happily married couple, we drank our 40ozers out of plastic cups. I was very good friends with the groom, but did not know the bride or her family that well. I met her family at the wedding, but did not interact with them at the reception.

As it turned out, this patch of Lake Erie waterfront had a slope that was perfect for rolling drunk Polish guys down it. Knitter complied and once again we rolled him down the hill singing our now trademarked song:

You may not realize this, but drunk guys singing “Roll out the Knitter” may be misheard at a distance. It could have been the crashing of the 2” waves on the shore or the shitty sound system, but the brother of the bride thought he heard us singing something else that night. Here’s what he heard:

And it turns out, that does not go over well at wedding receptions.

The in-law only shared this with a few of his family (not the bride) and kept it bottled in for several months. It came out months later at some family event as the brother of the bride finally released his discontent. Upon this revelation, it was quickly cleared up as to what was actually being said and the in-law felt a bit silly if not a lot silly.

It’s been a long while since I have had the opportunity to tread up/down the hills of Ohio University and longer since I have used leverage and gravity to propel my friend, laughing and grunting down a brick laden street. I haven’t had a 40ozer in years. But I still can sing the song:

You forgot the greatest of 40 ouncers - Mickey's! I credit it with the gigantic hole in my esophagus, liver, kidneys, small intestine, large intestine, scrotum, etc.

Don't forget that you can take any 40oz and put the word Ice after it and come up with a new Malt Liquor.

Check out this 40oz link

We did the same thing down here except Florida doesn't have 40oz only 32oz. We just called them "quarts". Most were only 99 cents.

Just like you, we started any club night with 2 quarts to save money. (Unless it was quarter cup night) Money was tight in the early 90's.

Brands I remember buying.
Olde Englishe 800. I never called it that though it was either OE or 8-Ball (from Straight Outta Compton)

That Cool Colt was nasty nasty nasty shit. One of my friends loved it. He liked wine coolers and zema too though.

Oh and how can I forget Magnum, it was only 89 cents but horrible. Got me buzzing for 20 cents less though.

How the heck did I forget OE?

A friend had a party a few years ago where you brought 2 40ozers and they were immediately taped to your hands with duct tape. You had to drink them both before they could be removed. We cheated cause we all had to pee so we cut them of one at a time.