A Dignified Death for the Younglings

{Editors Note: This is part one of a three part series concerning bits of the Star Wars movie saga. Yes, I realize this is several years too late, but my son is almost ready to watch the films and these things need rehashed.}

If you don’t give a crap about the Star Wars movies, you can stop reading here. If you know Shaak Ti’s horoscope sign in relationship to the planet she was spawned on, you might want to stop reading as well. (I’m not that fanboyish.)

If you are still reading, you might be familiar with Anakin Skywalker’s complete turn to the dark side when he kills off all the “Younglings” at the Jedi Temple in Episode 3, Revenge of the Sith. It’s a major part of the film as he not only fully envelops himself in the dark side, but he kills off the next generation of Jedi.

I have a few problems with how this was all taken care of in the film. Or suggested. Or actually skipped over.

First off, a side note… who the crap came up with the term “Younglings?” Younglings sounds like these kids are in finishing school. These tots are future Jedi pricks and should be named so. Perhaps it is a way to knock them down a notch and deflate their egos. They should either be named something totally demoralizing (like Poopypants or Twinkle Yum-Yums) or give them a weird sounding name that is actually a foreign capital (like Yangons or Andorra la Vellas.)

In the film, the actual murder of the Jedi and the Jedi-in-training is treated mostly like a flashback when Obi-Won catches the 11 o’clock news and sees the replay on a video screen. It was a nice way of revealing a major plot point while keeping the film safe for all audiences (i.e. pussing out.)

I should have known this is how he would play out the scene. In Episode 2, Lucas didn’t even let us see Anakin kill off a whole tribe of dirty, stinking, mommy killing Sand People. If he can’t have the main character killing off some ugly aliens, he really doesn’t have a pair of Seeker Remotes in his underwear to pull off a really good slaughter scene. 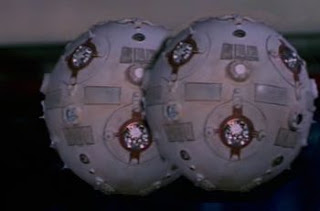 I am not suggesting that we should have seen Anakin sauntering through the Jedi Temple killing everything like the Terminator in a Police Station. I am not in this for the blood shed. What I wanted to see was a bunch of kids working together in a hopeless battle to kill off a Jedi traitor and several battalions of Stormtroopers. These kids weren’t just in their rooms playing with Legos. They were in training to become Jedi. They should have immediately figured out what was going on and grouped together to fight off the invaders. They would have used the weapons at hand. Laying traps. Working in small groups to confuse and attack. Using their hide and seek hidey holes. Sacrificing themselves to save the others. They would have used trickery and their limited understanding of the force. And in the end, they would have all died. But at least Lucas could have given the kids some dignity.

But no. Instead, all we see are a couple of scared children, “huddled in a corner,” asking Anakin who is going to fight their battle for them. Anakin fires up his light saber and we are left to assume the obvious. Anakin is going to kill the children. Does having them fight back make him any less evil? I can see the argument that killing innocent children is more evil than killing kids that are fighting back. But these were not normal kids.

It should have been similar to the battles in the Ender’s Game novel. A group of outnumbered, out muscled kids kicking ass against extraordinary odds. Or Toy Soldier, where kids use their cunning, toy airplanes and the death of Wesley Crusher to hold out against kidnappers. Anyone remember TAPS? I’d even take a bit of the fucking Goonies where the kids fight off self doubt and puberty.

In the end of Sith, all the kids die. Because they had too. But they didn’t have to die cowering in a corner or slashed in the back as they ran in a panic. Give the kids some dignity. The least he could have done was have Yoda say they died fighting the best they could. Or hinted at how there was a last stand. Instead, we are left to remember these young kids as cowering innocents. And I think that is a travesty.

Yo Juan, that was a very well thought of critique. I'd rate it above the Independent Contractor theory put forth in the movie Clerks.