The roll to clean-up ratio

It seems pretty late in the season for toilet papering, but that has not stopped the roaming gangs of teenagers in my neighborhood from raining down their hormone infused, single ply streams of terror. 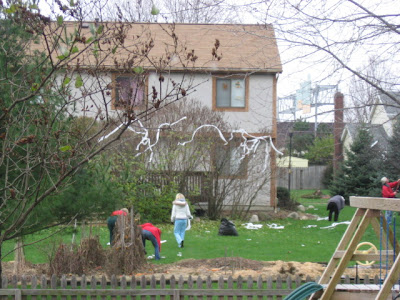 The neighbor behind me got it two weeks ago and another down the street got it this weekend. It was probably a revenge papering. I’d imagine a teen could wake up one morning with a single sheet of TP in their bed from the neighborhood teen Don as a message to cut it out. Of course, the teenage guys would all ready have hundreds of crusty, crumpled sheets of tissue paper in their beds and wouldn’t notice.

I have three siblings, so our house got nailed a couple of times while we were in high school. I wasn’t exactly popular so the blame usually went to my sisters or older brother. I still had to help clean up. Our house would probably have been hit more often, but we lived way out in the middle of nowhere. Good for clandestine raids. Bad for the time and effort it took to get there.

But I know for sure that on one occasion our house got TP’d by a few of my admirers.

I woke up that Saturday morning without a hangover. I remember this because I wasn’t smart enough or possibly dumb enough to start drinking until late in my senior year. Dad directed me to look outside. The trees by the road had a nice coating of paper. They had not taken the time to work inwards towards the house. There wasn’t any additional material like shaving cream or malicious plastic forks in the lawn. Looked like a drive by TP'ing. Stick to the road, unload for a few minutes and drive off. Not a 100 roll job, but decent work. You could tell there were girls involved because they wrapped one of the tree trunks. Only girls would spend the time wrapping a tree trunk. A trunk wrap takes a longer time to apply, but it has a visual appeal. To the homeowner, or homeowner’s son, it only takes ten seconds to clean up. Not worth the roll to clean-up ratio that TP connoisseurs expect.

I grabbed some garbage bags and headed outside. About 45 minutes later I was done. All I needed was a rake and a stick to get most of it down. There was a smattering of paper still stuck in the higher branches, but you can never get it all.

Inside dad asked me a particularly loaded question, “What did you do to those girls to make them want to TP the house?”

Knowing this was a trap, I answered back with a question, “What girls?”

“The four girls that were here last night.”

Did he watch them from the window? How’d he know it was four girls? Did he invite them in for late night coffee?

The answer, without going through too many quotation marks, was that he counted them when the Sheriff brought them to the door.

A few of my female admirers schemed to TP my house. They had just gotten started when a Sheriff drove by. They all scattered, but in the middle of nowhere, it’s hard to scatter far without having to jump a fence or fall in a drainage ditch. The sheriff gathered them together and brought them to the front door. I was asleep, but dad wasn’t. He answered the door and the Sheriff explained that he caught the girls white handed. He wondered if dad wanted him to stay and help supervise the girls cleaning up their mess.

“No. Doug probably deserves it. He can clean it up in the morning.”

The girls were allowed to leave with repeated promises of reform.

When Greg turns 16, he and I are going to load up the 2012 Honda Goya with 1000 rolls of TP and travel the country tracking down those four girls. We’ll show them what for.

No tree wrapping for us.

Man your memory is good.

When you make your trip, don't forget the flaming bag of dog poo and baseball bat for the mailboxes.

I haven't thought of forking in ages! Remember those spoon/fork concoctions from KFC? If we used those, it was called "sporking" (but those didn't stick in the ground as well.) And while forking wasn't as good as a blue smoke bomb being tossed into a living room, it at least was good for aerating the lawn!

Check out this humorous video on how to TP!

The Art of TPing or How to Gift Wrap a House