There’s nothing special about Dougs. Dougs are almost the same as any Tom, Bob or Brian. You’ve got all types of Dougs, but it seems that all Dougs are one notch down from everyone else. The best looking Doug could never be as good looking as the best looking Tom. (Check out the Google photo search for Doug. Good grief! Is that Doug Henning on a rainbow?) The smartest Doug would never be as smart as the smartest Brian. But damnit, we’ve got a sense of humor. Dougs are funny. Dougs have personality. Dougs get the last girl at the party, but at least we are not jerking off at the end of the night like the Pauls and the Teds.

I was just flipping through some collections of Flickr photos. I searched for photos of Dougs. Again, mostly not especially good looking guys doing not especially interesting stuff.

But then I found a photo of a Doug that worked for the BBC. Doug had recently died. His friend, nanavut, memorialized him by saying the following: 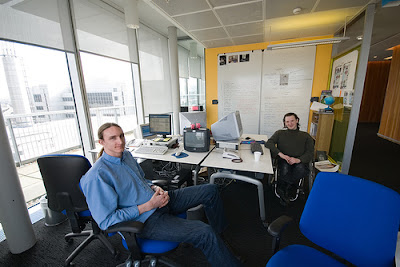 “Doug Graham, a gentle soul sitting at the rear of this photo; a friend and colleague of mine and many others at the BBC died November 22nd, aged 26.
I remember him for his enthusiasm and positive outlook on life, no matter all the difficulties he himself suffered through. He knew how to see the bright side of everything.
Quick to make friends, genuine in his relationships, kind, and always full of positive energy - Doug taught me alot.
I hope you will remember him along with me.”

And I was sad for their loss. And his loss. And the passing of such a young person.

And then I realized that no one would ever describe me as being genuine. No one would remember me for my positive outlook on life and that I might know which side was the bright one.

And then I did a re-realization. I’m an awful bastard. A heartless ass. A real jerk.

And you know what? Thank God for that.

Which is good for you, my friend. Otherwise I’d be doing something good and positive instead of writing this.

So from the son of a bitch Doug to the genuine Doug Graham: You were surrounded by people that laughed with you, respected you and loved you. It wasn’t a long enough battle, but in the end you won. Thank you for sharing with me the opportunity to reflect upon my life.

Now, did they bury you in the wheel chair or did you get wheels put on the outside of the coffin?

Email ThisBlogThis!Share to TwitterShare to FacebookShare to Pinterest
Labels: Doug