My friend Meshell is a very talented and creative illustrator. We got together at B-Hampton’s for a drink a few months ago and she had her portfolio on hand from an earlier meeting. Meshell and I had discussed children’s books in the past and I thought she and I should team up to create something. But like most my ideas, they are simply words with no substance behind them. That night though, Meshell showed me one of her illustrations called “The Power of Soup.” 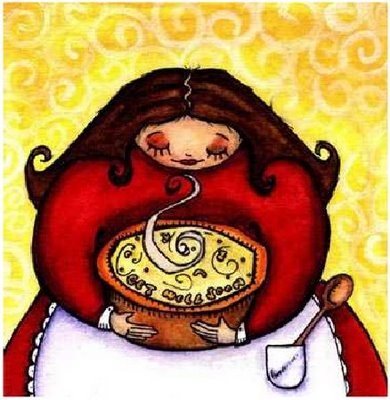 I immediately thought of an idea for a story and went home and wrote it.

I then submitted it to a publishing company.

And then I waited.

I knew that my story wouldn’t get published. It was my first submission. It was pretty rough. I found out later that my main character’s name was not only a Teletubbie, but also a slang word for kinky sex. (Lala. I choose it because it was Miss Sally’s nickname for her sister. Luckily I had never seen the Teletubbies and only found out what Lala meant when I saw it on a 17 year-old’s T-shirt.)

What I was really looking for was acknowledgement that someone opened my letter and glanced at my five pages of dreck and responded with a form letter suggesting I burn my keyboard and take up roofing again.

And I waited some more.

Most submissions take about 10 – 15 weeks to get processed. As of yesterday, it had been almost 30 weeks and I kept telling myself that I had forgotten about it.

Yesterday, I got a letter from Tricycle Press, the children’s book division of Ten Speed Press. A form letter. A rejection letter. 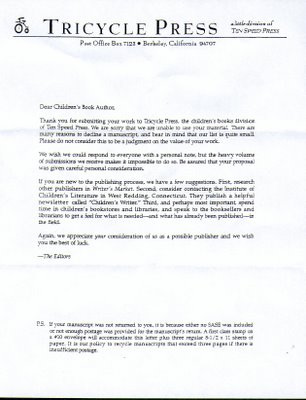 And I feel acknowledged.

I then went back to re-read my story and oh boy… it could use a bit of editing. I’ll change Lala’s name (though she will always be Lala to me) and beef up a bit of the story. Perhaps I will change the part where Lala receives second degree burns from hugging a pot of steaming, hot soup.

Tell them you already have a sale.

Check OSC's site @ hatrack.com; he's got some good tips on dealing with publishers.

You got a second sell with me!