I am still of the belief that the internet is fake. That most the “people” you deal with on a daily basis via the net are bots and a few lines of programming smeared over toast. I’d have to guess that there are probably only 79 real people on the internet. Six of those people are responsible for 6,456,332 MySpace pages each.

In this fake world, I found myself making a bet with Carpanza. Carpanza’s some guy out of Minneapolis that likes to drink and seems like he’s got his shit together. We are in a Fantasy Football league and we "talk" crap, via the internet, about how crappy the other guy’s crappy players are. We also found ourselves talking smack about Ohio State and the Iowa Hawkeyes. While this talk of the smack was commencing, I made a bet with him that Ohio State would beat the Hawkeyes. He disagreed and agreed to the bet. The wager was for the winner’s choice of a six pack of beer from beeronthewall.com.

I chose a six pack of Lost Coast’s Downtown Brown. This was one of Miss Sally favorite beers back when our relationship was young. She had drank it in California and we couldn’t find a distributor in Ohio. It seems the only way to get it is by winning a bet.

So here’s where it got interesting for me. Would Carpanza, an imaginary internet character, actually buy a six pack of beer and have it shipped to some stranger in Ohio who was also probably imaginary?

Today we received a very well packaged, 6-pack of Downtown Brown. The bottles were lovingly swaddled in cardboard and they even folded up the decorative, 6-pack carrier and included it in the box. It was beautiful. 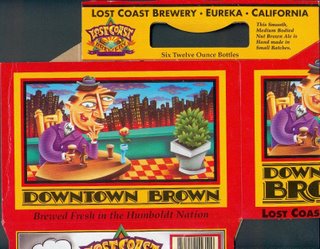 As I type, they are chilling in the refrigerator, waiting for me to savor a Buckeye win, the warm memories of young love and my new belief that perhaps there is a shred of humanity out there in the electronic aether.

The enclosed card read, “I hope this beer arrives skunky, and gives you explosive diarrhea.”

Who knew you were a romantic at heart?

Great story. This is why foo was created and why I need to keep it going.

When I win next year... I expect you to send a funnel and legnth of plastic tubing with mine.

Yah....
You are missed by the 78th real person on myspace internet. I can guarantee it.

So the bartender says to Rene Descartes, "Want another beer?" and Descartes says, "I think not", and disappears.