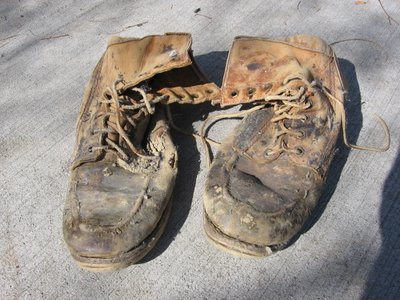 I started roofing back in the Summer of 1989. A roofer needs boots. I bought a pair and tried to scuff them up the day before I started so that it would look like I wasn’t a punk kid. I was a punk kid and the roofers called me out on my boots the first day. They had to do it quick because by the second day, they were tar stained and looked like boots.

One day, I screwed roofing washers on to the back of both boots and pretended they were spurs. I sauntered into the group of guys circled up eating lunch with my boots jingling and said something John Wayneish. Old Goat said, “Hey Tinkerbell. Nice fairy boots.” That nickname stuck for three years.

My boots went with me to college and I played backyard volleyball in them because I thought it was cool.

My boots went to Alaska where I wore them in a tent for five weeks and then on the retort line.

My boots went with me to Europe. Though Acton and I never went anywhere that wasn’t paved, I brought them just in case.

They went with me to Shreveport, Boston, Omaha, Denver, Syracuse, Ft. Lauderdale and back to Columbus. They were a conversation piece in my apartment when people would ask what they hell they were.

My boots didn’t get thrown out when Miss Sally moved in, but she did make me leave them in the garage. They traveled from the apartment to our first house and made the cut going to our second home.

The soles were worn almost flat with only suggestions of tread. The laces had been replaced three times. When I slid them on, they felt like a second skin. And I mean a creepy feeling of a second skin. I was usually grossed out for the first five to ten minutes.

Today, I threw away my boots. I probably threw away 400 baby spiders as well. They deserved a better burial or funeral pyre, but I hate to think about the toxic cloud they would have produced.

I took some photos of them before I tossed them in the trash.

Thank you boots. I will miss you. 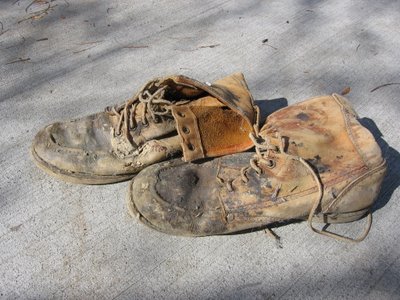 Email ThisBlogThis!Share to TwitterShare to FacebookShare to Pinterest
Labels: boots

I can smell them from here.

Sounds like a pair of boots I had when I was in college. I wore them pretty much everyday for about two years. Basically, I was too dirt poor to buy another pair.

They were a good pair of hiking boots, and got me where I was going. The stiching eventually gave out and a big hole opened up on the side, and they were no longer functional.

I still kept them around for some reason. I eventually tossed them a couple years ago. I did it with with some regret. I walked a lot of miles in those boots, they reminded me of the past.